It’s widely believed that Balzac’s literary activities wound down when he died in the 19th century, but his ghost visited Todd Robins’s College Hill lair one morning in the fall of 2018.  Balzac's message was clear: (A) found a literary magazine, and (B) name it after his criminal mastermind character, Vautrin.  The great Frenchman then prevailed upon an intriguing mix of writers to contribute to the inaugural issue.  Robins typed the submissions on his Smith Corona Silent from the 50s, resulting in Volume 1, Issue 1 of Wichita’s new print-only literary magazine.  Le voila ! 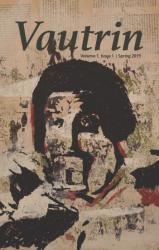