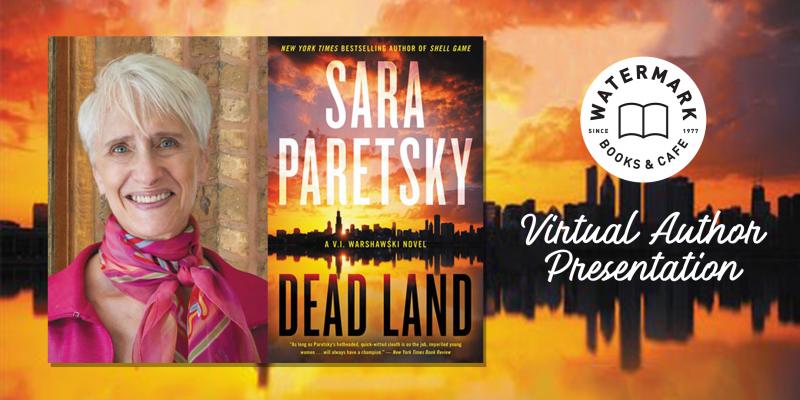 What: Watermark Books & Café invites you to attend a virtual evening with the New York Times bestselling author of the renowned V.I. Warshawski series! Sara Paretsky will be discussing her newest book in the propulsive series, Dead Land. Signed bookplates will be available for attendees who purchase Dead Land from Watermark Books.

Where: This is a virtual event and will be hosted online with the help of Zoom and Facebook Live. Sara will answer attendee questions via the Zoom webinar. To register click HERE.

“V.I. Warshawski is as dogged and ferocious as ever. So is Sara Paretsky, who is at the top of her crime novel game.”
— C.J. Box

Chicago’s legendary detective, V.I. Warshawski, knows her city’s rotten underbelly better than most, but she’s unable to avoid it when her goddaughter drags her into a fight over lakefront land use, in this propulsive novel from New York Times bestseller Sara Paretsky.

Chicago may be the city of broad shoulders, but its political law is “Pay to Play.” Money changes hands in the middle of the night, and by morning, buildings and parks are replaced by billion-dollar projects.

Chicago PI V.I. Warshawski gets pulled into one of these clandestine deals through her impetuous goddaughter, Bernie Fouchard. Bernie tries to rescue Lydia Zamir, a famed singer-songwriter now living on the streets; Zamir’s life fell apart when her lover was murdered next to her in a mass shooting at an outdoor concert. Not only does Bernie plunge her and V.I. headlong into the path of some ruthless developers, they lead to the murder of the young man Bernie is dating. He’s a computer geek working for a community group called SLICK.

V.I. is desperate to find a mysterious man named Coop, who roams the lakefront in the middle of the night with his dog. She’s sure he holds the key to the mounting body count within SLICK. Coop may even know why an international law firm is representing the mass murderer responsible for Lydia’s lover’s death. Instead, the detective finds a terrifying conspiracy stretching from Chicago’s parks to a cover-up of the dark chapters in America’s meddling in South American politics. Before she finds answers, this electrifying novel pushes V.I. close to the breaking point: People who pay to play take no prisoners.

Hailed by P. D. James as “the most remarkable” of modern crime writers, Sara Paretsky is the New York Times bestselling author of twenty-two novels, including the renowned V.I. Warshawski series. She is one of only four living writers to have received both the Grand Master Award from the Mystery Writers of America and the Cartier Diamond Dagger from the Crime Writers Association of Great Britain. She lives in Chicago.