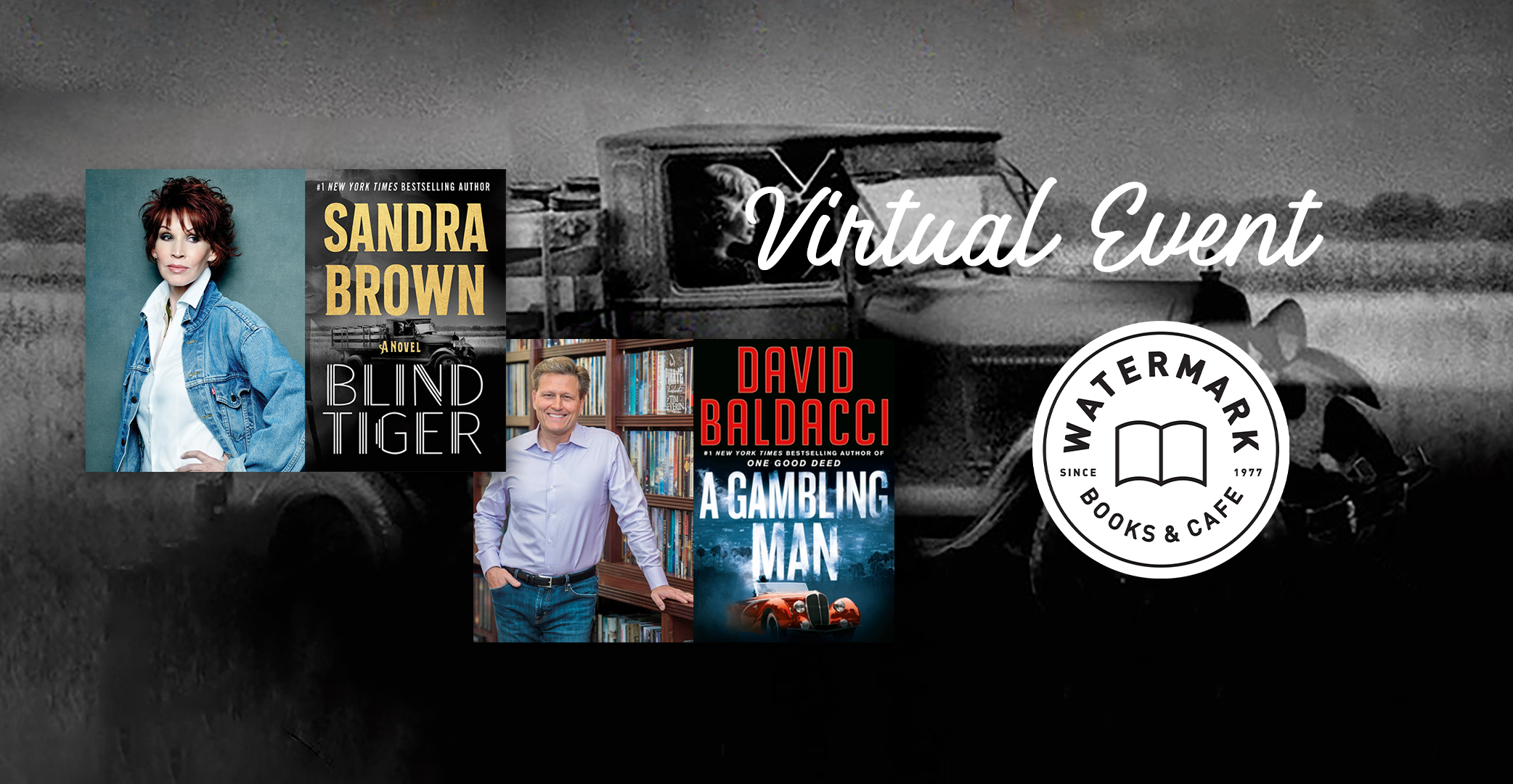 What: Watermark Books & Café invites you to join prolific authors, Sandra Brown and David Baldacci, for a special in-conversation event! During the event, they will be discussing Sandra's newest book Blind Tiger—a suspensful novel where Prohibition is the new law of the land, but murder, mayhem, lust, and greed are already institutions in the Moonshine Capitol of Texas.

This is a ticketed event; each ticket comes with a signed copy (while supplies last) of Blind Tiger. We will let you know when your books are available for in-store pickup and all other books will be shipped as instructed at check out.

Your purchase of The Sandra Brown & David Baldacci (available HERE) provides you access to the online event for one viewer and includes a signed copy (while supplies last) of BLIND TIGER. Prior to the event, you will receive an email from Watermark with information on how to join the event on August 3, 2021. If you have any questions, please email Madison Murphy at marketing@watermarkbooks.com

The year 1920 comes in with a roar in this rousing and suspenseful novel by #1 New York Times bestselling author Sandra Brown. Prohibition is the new law of the land, but murder, mayhem, lust, and greed are already institutions in the Moonshine Capitol of Texas.

Thatcher Hutton, a war-weary soldier on the way back to his cowboy life, jumps from a moving freight train to avoid trouble . . . and lands in more than he bargained for. On the day he arrives in Foley, Texas, a local woman goes missing. Thatcher, the only stranger in town, is suspected of her abduction, and worse. Standing between him and exoneration are a corrupt mayor, a crooked sheriff, a notorious cathouse madam, a sly bootlegger, feuding moonshiners . . . and a young widow whose soft features conceal an iron will.

What was supposed to be a fresh start for Laurel Plummer turns to tragedy. Left destitute but determined to dictate her own future, Laurel plunges into the lucrative regional industry, much to the dislike of the good ol’ boys, who have ruled supreme. Her success quickly makes her a target for cutthroat competitors, whose only code of law is reprisal. As violence erupts, Laurel and—now deputy—Thatcher find themselves on opposite sides of a moonshine war, where blood flows as freely as whiskey.

Sandra Brown is the author of seventy-two New York Times bestsellers. There are over eighty million copies of her books in print worldwide, and her work has been translated into thirty-four languages. She lives in Texas. For more information you can visit www.SandraBrown.net.

DAVID BALDACCI is a global #1 bestselling author, and one of the world's favorite storytellers. His books are published in over forty-five languages and in more than eighty countries, with 150 million copies sold worldwide. His works have been adapted for both feature film and television. David Baldacci is also the cofounder, along with his wife, of the Wish You Well Foundation, a nonprofit organization dedicated to supporting literacy efforts across America. Still a resident of his native Virginia, he invites you to visit him at DavidBaldacci.com and his foundation at WishYouWellFoundation.org.