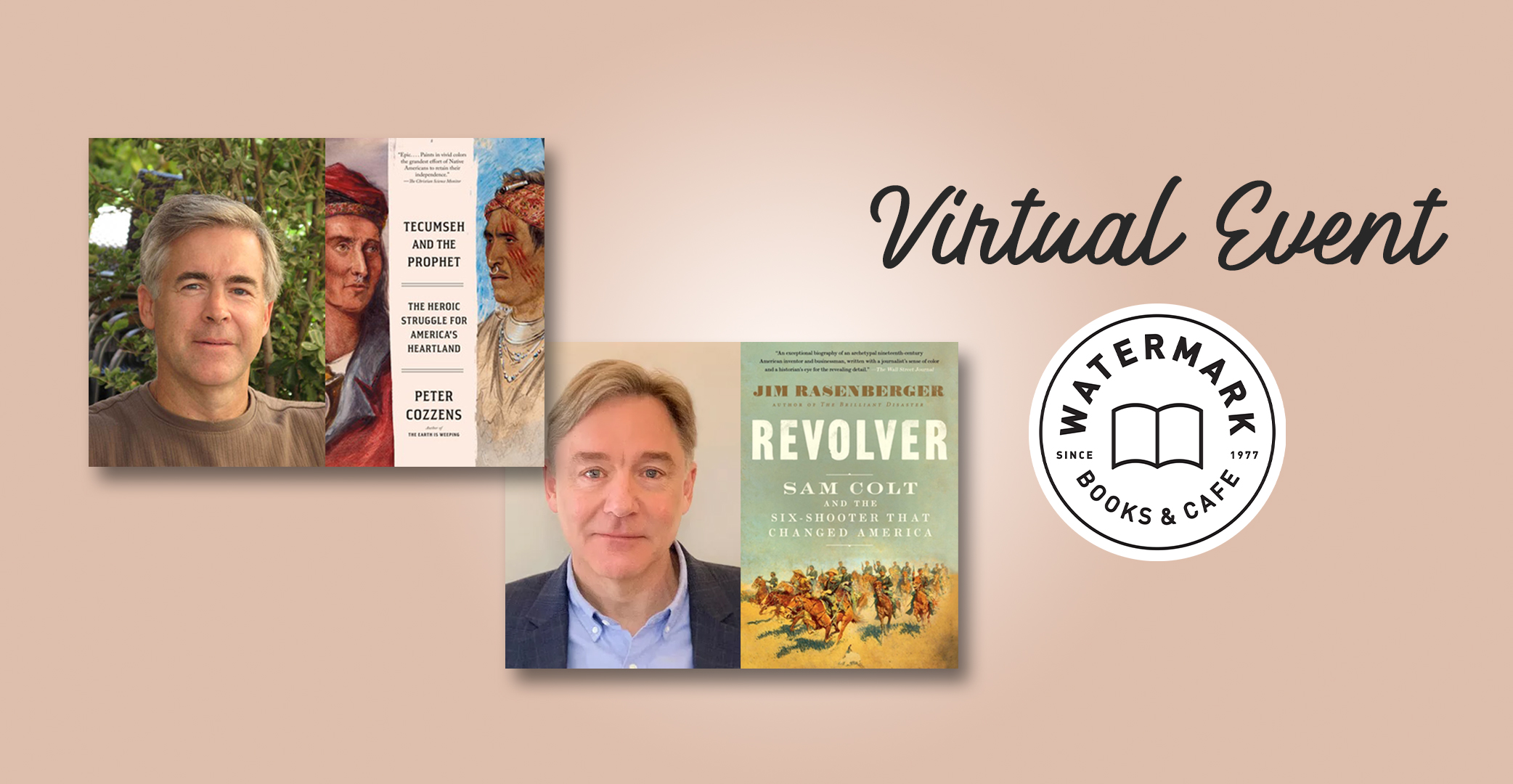 What: Watermark Books & Café invites you to attend a virtual event with award-winning author Peter Cozzens! Peter will be joining us for a virtual discussion in celebration of the paperback release of his book, Tecumseh and the Prophet— An insightful, unflinching portrayal of the remarkable siblings who came closer to altering the course of American history than any other Indian leaders. Peter will be joined in conversation with Jim Rasenberger author of Revolver: Sam Colt and the Six-Shooter That Changed America—biography of Samuel Colt—the inventor of the legendary Colt revolver (a.k.a. six-shooter).

About Tecumseh and the Prophet

An insightful, unflinching portrayal of the remarkable siblings who came closer to altering the course of American history than any other Indian leaders.⁠ --H.W. Brands, author of The Zealot and the Emancipator

The first biography of the great Shawnee leader to make clear that his misunderstood younger brother, Tenskwatawa, was an equal partner in the last great pan-Indian alliance against the United States.

Until the Americans killed Tecumseh in 1813, he and his brother Tenskwatawa were the co-architects of the broadest pan-Indian confederation in United States history. In previous accounts of Tecumseh's life, Tenskwatawa has been dismissed as a talentless charlatan and a drunk. But award-winning historian Peter Cozzens now shows us that while Tecumseh was a brilliant diplomat and war leader--admired by the same white Americans he opposed--it was Tenskwatawa, called the Shawnee Prophet, who created a vital doctrine of religious and cultural revitalization that unified the disparate tribes of the Old Northwest. Detailed research of Native American society and customs provides a window into a world often erased from history books and reveals how both men came to power in different but no less important ways.

Cozzens brings us to the forefront of the chaos and violence that characterized the young American Republic, when settlers spilled across the Appalachians to bloody effect in their haste to exploit lands won from the British in the War of Independence, disregarding their rightful Indian owners. Tecumseh and the Prophet presents the untold story of the Shawnee brothers who retaliated against this threat--the two most significant siblings in Native American history, who, Cozzens helps us understand, should be writ large in the annals of America.

PETER COZZENS is the author or editor of sixteen acclaimed books on the American Civil War and the Indian Wars of the American West, and a member of the Advisory Council of the Lincoln Prize. In 2002 he was awarded the American Foreign Service Association's highest honor, the William R. Rivkin Award, given annually to one Foreign Service Officer for exemplary moral courage, integrity, and creative dissent. He lives in Kensington, Maryland.

Jim Rasenberger is the author of four books—Revolver; The Brilliant Disaster; America, 1908; and High Steel—and has contributed to the New York Times, Vanity Fair, Smithsonian, and other publications. A native of Washington, DC, he lives in New York City.

Tecumseh and the Prophet: The Heroic Struggle for America's Heartland (Paperback)