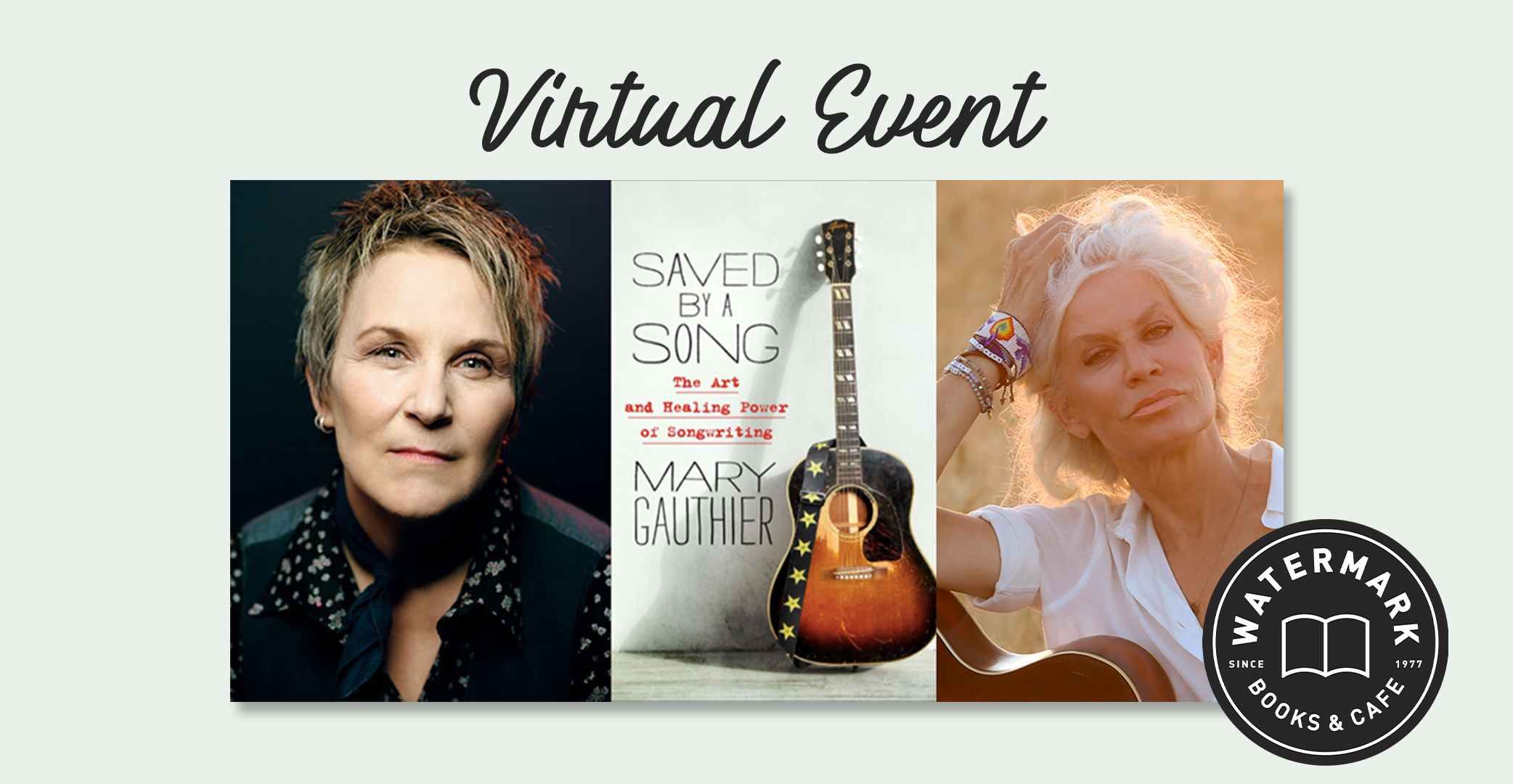 What: Watermark Books & Café invites you to join legendary singer-songwriters, Mary Gauthier and Robin Macy, for a special in-conversation event! During the event, Mary will be discussing her newest book Saved by a Song—part memoir, part philosophy of art, part nuts and bolts of songwriting, the book celebrates the redemptive power of song to inspire and bring seemingly different kinds of people together.

This is a ticketed event; each ticket comes with a copy of Saved by a Song along with a signed bookplate while supplies last. We will let you know when your books are available for in-store pickup and all other books will be shipped as instructed at check out.

Your purchase of The Mary Gauthier & Robin Macy Event Ticket (available HERE) provides you access to the online event for one viewer and includes a copy of SAVED BY A SONG along with a signed bookplate while supplies last. Prior to the event, you will receive an email from Watermark with information on how to join the event on July 22, 2021. If you have any questions, please email Madison Murphy at marketing@watermarkbooks.com

About Saved by a Song

From the Grammy-nominated folk singer and songwriter, an inspiring exploration of creativity and the redemptive power of song
Mary Gauthier was twelve years old when she was given her Aunt Jenny’s old guitar and taught herself to play with a Mel Bay basic guitar workbook. and music offered her a window to a world where others felt the way she did. Songs became lifelines to her, and she longed to write her own, one day.

Then, for a decade, while struggling with addiction, Gauthier put her dream away and her call to songwriting faded. It wasn’t until she got sober and went to an open mic with a friend did she realize that she not only still wanted to write songs, she needed to. Today, Gauthier is a decorated musical artist, with numerous awards and recognition for her songwriting, including a Grammy nomination.

In Saved by a Song, Mary Gauthier pulls the curtain back on the artistry of songwriting. Part memoir, part philosophy of art, part nuts and bolts of songwriting, her book celebrates the redemptive power of song to inspire and bring seemingly different kinds of people together.

The Associated Press named MARY GAUTHIER one of the best songwriters of her generation. Her most recent release, Rifles & Rosary Beads, was nominated for a Grammy award for Best Folk Album, and Record of the Year by the Americana Music Association. Her songs have been recorded by dozens of artists, including Blake Shelton, Tim McGraw, Bettye Lavette, Kathy Mattea, Amy Helm and Candi Staton. Saved by a Song is her first book. She lives in Nashville.

For over thirty years Robin Macy has traveled America’s byways performing music with various groups – some more famous than others. After a devoted teaching career, Robin and her guitar -slinger husband, Kentucky White play roots music that harkens to an earlier time. They are stewards of the historic Bartlett Arboretum, a century-old bountiful patch of nature now listed on the National Registry of Historic Places in Belle Plaine, Kansas. Robin’s three solo releases, beginning with the 2008 Songs from the Garden, are anthems which celebrate the Agrarian life and lessons learned from loving and living on the land.