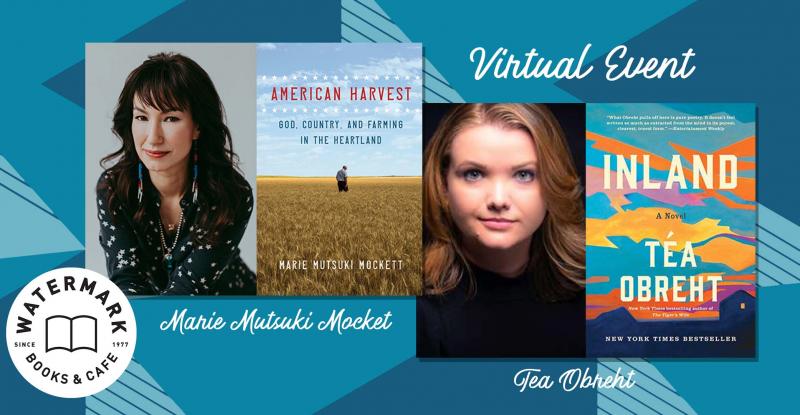 What: Watermark Books & Café invites you to attend a virtual in-conversation event with New York Times bestselling authors Marie Mutsuki Mockett and Téa Obreht! Marie Mutsuki Mockett will be discussing her new book American Harvest—An epic story of the American wheat harvest, the politics of food, and the culture of the Great Plains. Téa Obreht will be discussing the paperback release of her bestselling book Inland—A "bracingly epic and imaginatively mythic journey across the American West” (Entertainment Weekly).

Where: This is a virtual event and will be hosted online with the help of Zoom and Facebook Live. Questions will be answered via the Zoom webinar. To register click HERE.

An epic story of the American wheat harvest, the politics of food, and the culture of the Great Plains

For over one hundred years, the Mockett family has owned a seven-thousand-acre wheat farm in the panhandle of Nebraska, where Marie Mutsuki Mockett’s father was raised. Mockett, who grew up in bohemian Carmel, California, with her father and her Japanese mother, knew little about farming when she inherited this land. Her father had all but forsworn it.

In American Harvest, Mockett accompanies a group of evangelical Christian wheat harvesters through the heartland at the invitation of Eric Wolgemuth, the conservative farmer who has cut her family’s fields for decades. As Mockett follows Wolgemuth’s crew on the trail of ripening wheat from Texas to Idaho, they contemplate what Wolgemuth refers to as “the divide,” inadvertently peeling back layers of the American story to expose its contradictions and unhealed wounds. She joins the crew in the fields, attends church, and struggles to adapt to the rhythms of rural life, all the while continually reminded of her own status as a person who signals “not white,” but who people she encounters can’t quite categorize.

American Harvest is an extraordinary evocation of the land and a thoughtful exploration of ingrained beliefs, from evangelical skepticism of evolution to cosmopolitan assumptions about food production and farming. With exquisite lyricism and humanity, this astonishing book attempts to reconcile competing versions of our national story.

Marie Mutsuki Mockett was born to a Japanese mother and an American father. Her Japanese family owns and runs a Buddhist temple that has, among other things, performed exorcisms. This is her first novel.

NEW YORK TIMES BESTSELLER • The bestselling author of The Tiger’s Wife returns with “a bracingly epic and imaginatively mythic journey across the American West” (Entertainment Weekly).

In the lawless, drought-ridden lands of the Arizona Territory in 1893, two extraordinary lives unfold. Nora is an unflinching frontierswoman awaiting the return of the men in her life—her husband, who has gone in search of water for the parched household, and her elder sons, who have vanished after an explosive argument. Nora is biding her time with her youngest son, who is convinced that a mysterious beast is stalking the land around their home.

Meanwhile, Lurie is a former outlaw and a man haunted by ghosts. He sees lost souls who want something from him, and he finds reprieve from their longing in an unexpected relationship that inspires a momentous expedition across the West. The way in which Lurie’s death-defying trek at last intersects with Nora’s plight is the surprise and suspense of this brilliant novel.

Mythical, lyrical, and sweeping in scope, Inland is grounded in true but little-known history. It showcases all of Téa Obreht’s talents as a writer, as she subverts and reimagines the myths of the American West, making them entirely—and unforgettably—her own.

“As it should be, the landscape of the West itself is a character, thrillingly rendered throughout. . . . Here, Obreht’s simple but rich prose captures and luxuriates in the West’s beauty and sudden menace. Remarkable in a novel with such a sprawling cast, Obreht also has a poetic touch for writing intricate and precise character descriptions.”—The New York Times Book Review (Editors’ Choice)

“Obreht is the kind of writer who can forever change the way you think about a thing, just through her powers of description. . . . Inland is an ambitious and beautiful work about many things: immigration, the afterlife, responsibility, guilt, marriage, parenthood, revenge, all the roads and waterways that led to America. Miraculously, it’s also a page-turner and a mystery, as well as a love letter to a camel, and, like a camel, improbable and splendid, something to happily puzzle over at first and take your breath away at the end.”—Elizabeth McCracken, O: The Oprah Magazine

Téa Obreht’s debut novel, The Tiger's Wife, won the 2011 Orange Prize for Fiction and was an international bestseller. Her work has appeared in The Best American Short Stories, The New Yorker, The Atlantic, Harper’s Magazine, and Zoetrope: All-Story, among many others. Originally from the former Yugoslavia, she now lives in New York with her husband and teaches at Hunter College.

American Harvest: God, Country, and Farming in the Heartland (Hardcover)