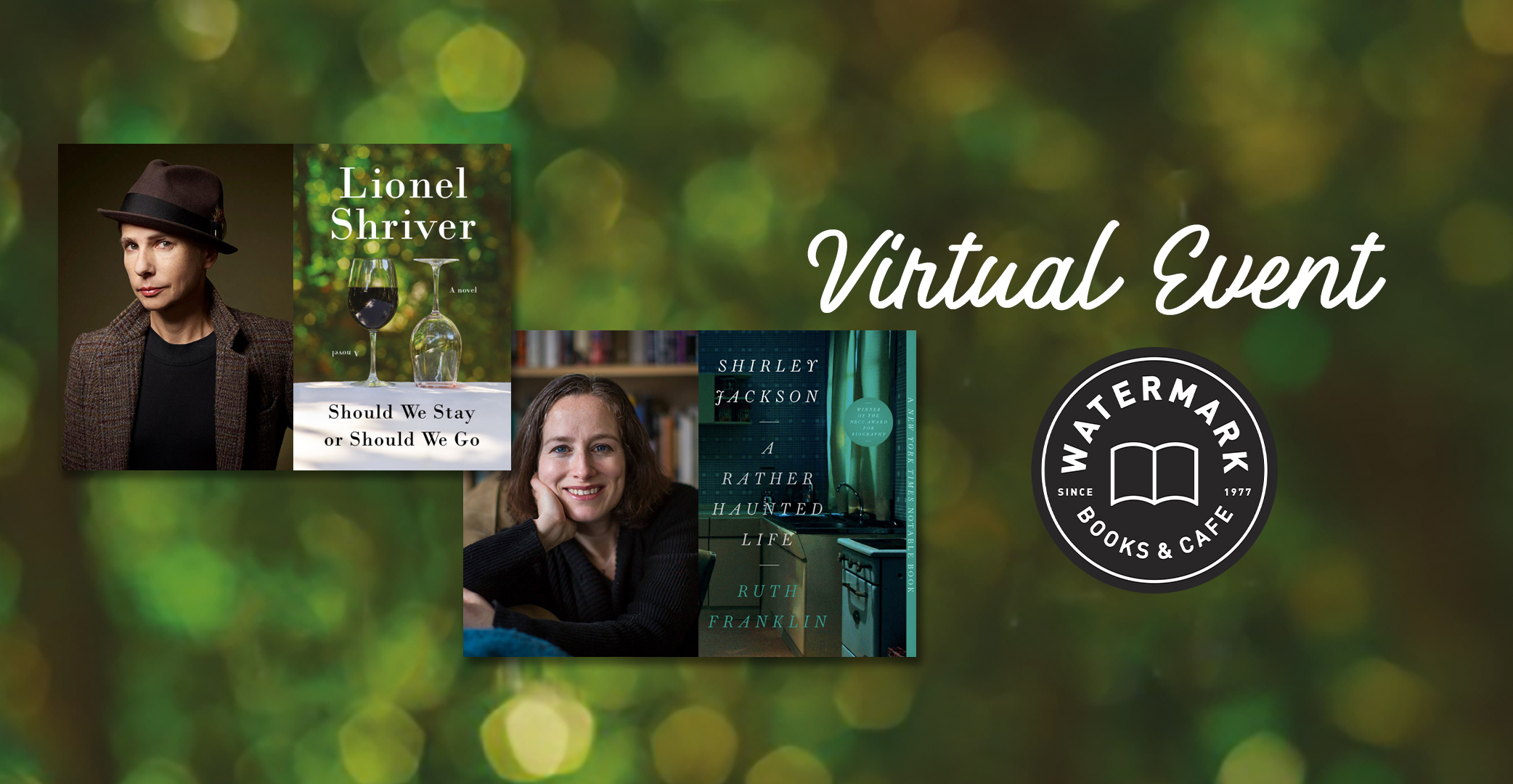 What: Watermark Books & Café invites you to attend a virtual event with the National Book Award finalist, author of So Much for That! Lionel Shriver will be joining us for a virtual discussion of her new novel Should We Stay or Should We Go—A brilliantly written story about a married couple that decides to take control of their final years by exiting the world together at the age of 80. Lionel will be joined in conversation with Ruth Franklin, critic and author of Shirley Jackson: A Rather Haunted Life—a thoughtful and persuasive biography, establishing Shirley Jackson as a serious and accomplished literary artist.

Both medical professionals, Kay and her husband Cyril have seen too many elderly patients in similar states of decay. Although healthy and vital in their early fifties, the couple fears what may lie ahead. Determined to die with dignity, Cyril makes a modest proposal. To spare themselves and their loved ones such a humiliating and protracted decline, they should agree to commit suicide together once they’ve both turned eighty. When their deal is sealed, the spouses are blithely looking forward to another three decades together.

But then they turn eighty.

By turns hilarious and touching, playful and grave, Should We Stay or Should We Go portrays twelve parallel universes, each exploring a possible future for Kay and Cyril. Were they to cut life artificially short, what would they miss out on? Something terrific? Or something terrible? Might they end up in a home? A fabulous luxury retirement village, or a Cuckoo’s Nest sort of home? Might being demented end up being rather fun? What future for humanity awaits—the end of civilization, or a Valhalla of peace and prosperity? What if cryogenics were really to work? What if scientists finally cure aging?

Both timely and timeless, Lionel Shriver addresses serious themes—the compromises of longevity, the challenge of living a long life and still going out in style—with an uncannily light touch. Weaving in a host of contemporary issues, from Brexit and mass migration to the coronavirus, Shriver has pulled off a rollicking page-turner in which we never have to mourn perished characters, because they’ll be alive and kicking in the very next chapter.

Lionel Shriver's fiction includes The Mandibles; Property; the National Book Award finalist So Much for That; the New York Times bestseller The Post-Birthday World; and the international bestseller We Need to Talk About Kevin, adapted for a 2010 film starring Tilda Swinton. Her journalism has appeared in the Guardian, the New York Times, the Wall Street Journal, and many other publications. She’s a regular columnist for the Spectator in Britain and Harper’s Magazine in the US. She lives in London and Brooklyn, New York.

Ruth Franklin is a book critic and frequent contributor to The New Yorker, Harpers, and many other publications. A recipient of a New York Public Library Cullman Fellowship and a Guggenheim Fellowship, she lives in Brooklyn, New York.

Should We Stay or Should We Go: A Novel (Hardcover)