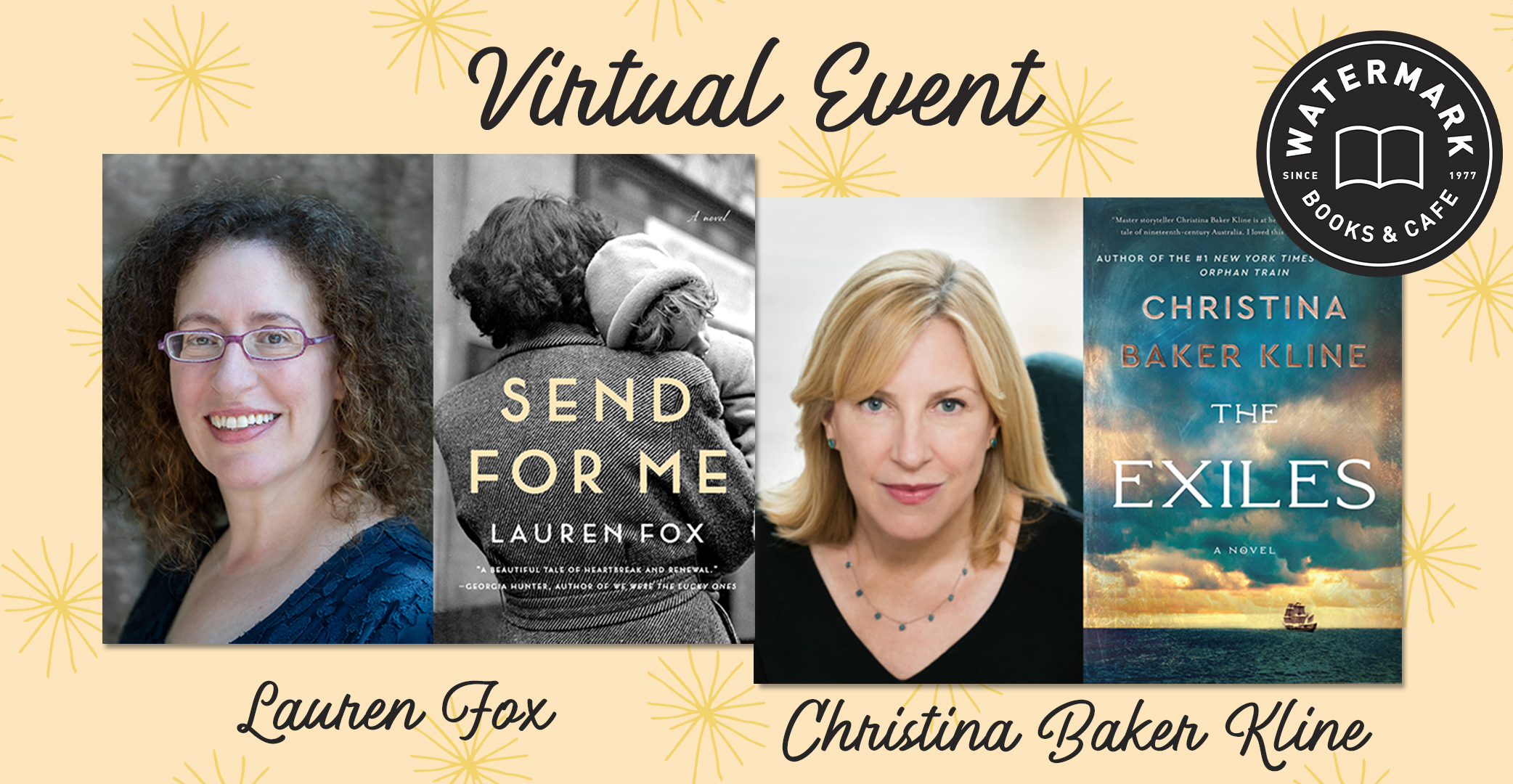 What: Watermark Books & Café invites you to attend a virtual event with bestselling authors Lauren Fox & Christina Baker Kline! Christina Baker Kline will be in virtual conversation with Lauren Fox discussing her new novel Send for Me—An achingly beautiful work of historical fiction that moves between Germany on the eve of World War II and present-day Wisconsin, unspooling a thread of love, longing, and the powerful bonds of family.

About Send for Me

Annelise is a dreamer: imagining her future while working at her parents' popular bakery in Feldenheim, Germany, anticipating all the delicious possibilities yet to come. There are rumors that anti-Jewish sentiment is on the rise, but Annelise and her parents can't quite believe that it will affect them; they're hardly religious at all. But as Annelise falls in love, marries, and gives birth to her daughter, the dangers grow closer: a brick thrown through her window; a childhood friend who cuts ties with her; customers refusing to patronize the bakery. Luckily Annelise and her husband are given the chance to leave for America, but they must go without her parents, whose future and safety are uncertain.

Two generations later, in a small Midwestern city, Annelise's granddaughter, Clare, is a young woman newly in love. But when she stumbles upon a trove of her grandmother's letters from Germany, she sees the history of her family's sacrifices in a new light, and suddenly she's faced with an impossible choice: the past, or her future. A novel of dazzling emotional richness that is based on letters from Lauren Fox's own family, Send for Me is a major departure for this acclaimed author, an epic and intimate exploration of mothers and daughters, duty and obligation, hope and forgiveness.

LAUREN FOX, who earned her M.F.A. from the University of Minnesota, is the author of the novels Days of Awe, Still Life with Husband, and Friends Like Us. Her work has appeared in numerous publications, including The New York Times, Marie Claire, Parenting, Psychology Today, The Rumpus, and Salon. She lives in Milwaukee with her husband and two daughters.

A #1 New York Times bestselling author of eight novels, including The Exiles, Orphan Train, and A Piece of the World, Christina Baker Kline is published in 40 countries. Her novels have received the New England Prize for Fiction, the Maine Literary Award, and a Barnes & Noble Discover Award, among other prizes, and have been chosen by hundreds of communities, universities and schools as “One Book, One Read” selections. Her essays, articles, and reviews have appeared in publications such as the New York Times and the NYT Book Review, The Boston Globe, The San Francisco Chronicle, LitHub, Psychology Today, and Slate.

Send for Me: A novel (Hardcover)

The Exiles: A Novel (Hardcover)