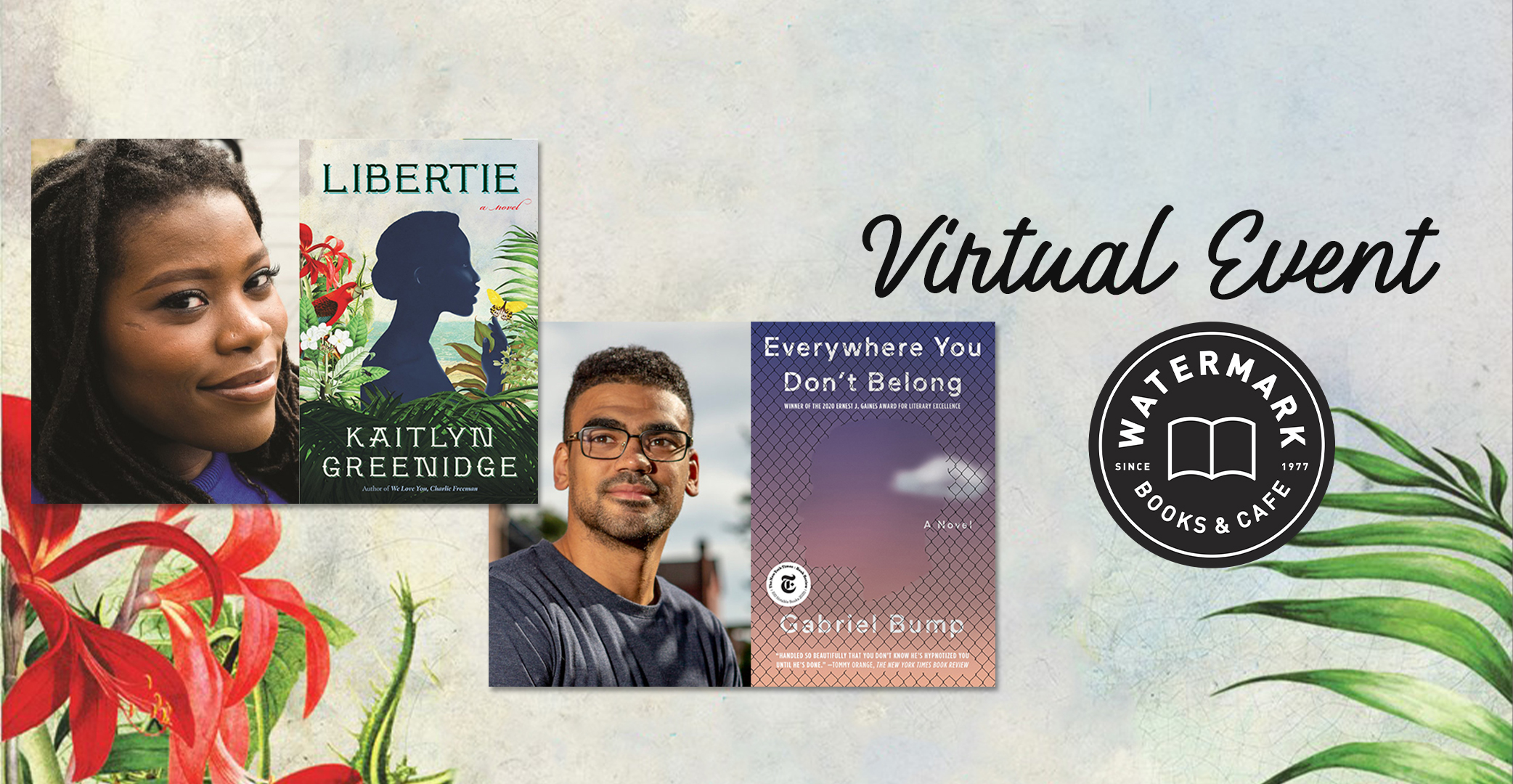 What: Watermark Books & Café invites you to attend a virtual event with the bestselling author of We Love You, Charlie Freeman! Kaitlin Greenidge will be joining us for a virtual discussion of her new novel Libertie—An unforgettable story about one young Black girl’s attempt to find a place where she can be fully, and only, herself. Kaitlyn will be joined in conversation with Gabriel Bump, bestselling author of Everywhere You Don't Belong—A comically dark coming-of-age story about growing up on the South Side of Chicago.

Named One of the Most-Anticipated Books of 2021 by:
O, The Oprah Magazine, The Millions, Refinery29, Garden & Gun, Publishers Lunch, BuzzFeed, The Rumpus, BookPage, Harper's Bazaar, Ms. Magazine, and more

“Pure brilliance. So much will be written about Libertie—how it blends history and magic into a new kind of telling, how it spins the past to draw deft circles around our present—but none of it will measure up to the singular joy of reading this book.”
—Mira Jacob, author of Good Talk

“This is one of the most thoughtful and amazingly beautiful books I’ve read all year. Kaitlyn Greenidge is a master storyteller.”
—Jacqueline Woodson, author of Red at the Bone

The critically acclaimed and Whiting Award-winning author of We Love You, Charlie Freeman returns with Libertie, an unforgettable story about one young Black girl’s attempt to find a place where she can be fully, and only, herself.

Coming of age as a freeborn Black girl in Reconstruction-era Brooklyn, Libertie Sampson is all too aware that her purposeful mother, a practicing physician, has a vision for their future together: Libertie is to go to medical school and practice alongside her. But Libertie, drawn more to music than science, feels stifled by her mother’s choices and is hungry for something else—is there really only one way to have an autonomous life? And she is constantly reminded that, unlike her mother, who can pass, Libertie has skin that is too dark. When a young man from Haiti proposes to Libertie and promises she will be his equal on the island, she accepts, only to discover that she is still subordinate to him and all men. As she tries to parse what freedom actually means for a Black woman, Libertie struggles with where she might find it—for herself and for generations to come.

Inspired by the life of one of the first Black female doctors in the United States and rich with historical detail, Kaitlyn Greenidge’s new and immersive novel will resonate with readers eager to understand our present through a deep, moving, and lyrical dive into our complicated past.

Kaitlyn Greenidge's debut novel, We Love You, Charlie Freeman, was one of the New York Times Critics’ Top 10 Books of 2016 and a finalist for the Center for Fiction First Novel Prize. She is a contributing writer for the New York Times, and her writing has also appeared in Vogue, Glamour, the Wall Street Journal, and elsewhere. She is the recipient of fellowships from the Whiting Foundation, the National Endowment for the Arts, and the Radcliffe Institute for Advanced Study. Greenidge lives in Brooklyn, New York.

About Everywhere You Don't Belong

“A comically dark coming-of-age story about growing up on the South Side of Chicago, but it’s also social commentary at its finest, woven seamlessly into the work . . . Bump’s meditation on belonging and not belonging, where or with whom, how love is a way home no matter where you are, is handled so beautifully that you don’t know he’s hypnotized you until he’s done.” —Tommy Orange, The New York Times Book Review

Claude just wants a place where he can fit. As a young black man born on the South Side of Chicago, he is raised by his civil rights–era grandmother, who tries to shape him into a principled actor for change; yet when riots consume his neighborhood, he hesitates to take sides, unwilling to let race define his life. He decides to escape Chicago for another place, to go to college, to find a new identity, to leave the pressure cooker of his hometown behind. But as he discovers, he cannot; there is no safe haven for a young black man in this time and place called America.

Percolating with fierceness and originality, attuned to the ironies inherent in our twenty-first-century landscape, Everywhere You Don’t Belong marks the arrival of a brilliant young talent.

Gabriel Bump grew up in South Shore, Chicago. His nonfiction and fiction have appeared in Slam magazine, the Huffington Post, Springhouse Journal, and other publications. He was awarded the 2016 Deborah Slosberg Memorial Award for Fiction. He received his MFA in fiction from the University of Massachusetts, Amherst. He lives in Buffalo, New York.