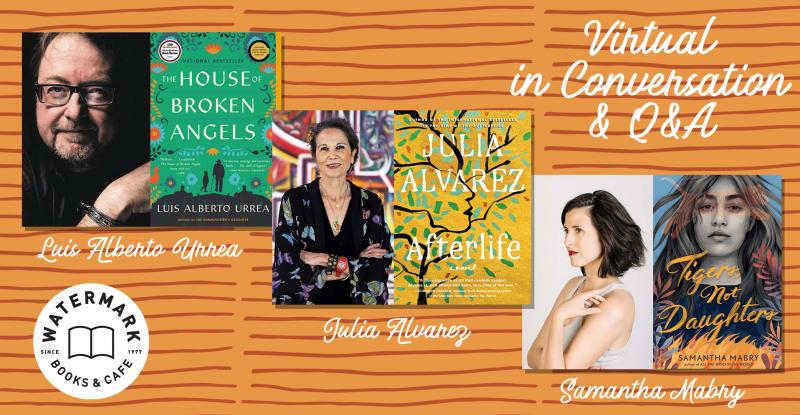 What: Watermark Books & Café invites you to attend a virtual author event with bestselling authors Julia Alvarez, Luis Alberto Urrea, and Samantha Mabry! Julia Alvarez will be discussing her newest book Afterlife—The first adult novel in almost fifteen years by the internationally bestselling author of In the Time of the Butterflies. Luis Alberto Urrea will be discussing his newest book The House of Broken Angels—A "raucous, moving, and necessary" story (San Francisco Chronicle), the De La Cruzes, a family on the Mexican-American border, celebrate two of their most beloved relatives during a joyous and bittersweet weekend. Samantha Mabry will be discussing her newest book Tigers, Not Daughters—An aching, magical novel that is one part family drama, one part ghost story, and one part love story.

Where: This is a virtual event and will be hosted online with the help of Zoom and Facebook Live. Julia, Luis,  & Samantha will answer attendee questions via the Zoom webinar. To register click HERE.

“A stunning work of art that reminds readers Alvarez is, and always has been, in a class of her own.” —Elizabeth Acevedo, National Book Award-winning author of the New York Times bestseller The Poet X

Antonia Vega, the immigrant writer at the center of Afterlife, has had the rug pulled out from under her. She has just retired from the college where she taught English when her beloved husband, Sam, suddenly dies. And then more jolts: her bighearted but unstable sister disappears, and Antonia returns home one evening to find a pregnant, undocumented teenager on her doorstep. Antonia has always sought direction in the literature she loves—lines from her favorite authors play in her head like a soundtrack—but now she finds that the world demands more of her than words.

Afterlife is a compact, nimble, and sharply droll novel. Set in this political moment of tribalism and distrust, it asks: What do we owe those in crisis in our families, including—maybe especially—members of our human family? How do we live in a broken world without losing faith in one another or ourselves? And how do we stay true to those glorious souls we have lost?

Julia Alvarez left the Dominican Republic for the United States in 1960 at the age of ten. She is the author of six novels, three books of nonfiction, three collections of poetry, and eleven books for children and young adults. She has taught and mentored writers in schools and communities across America and, until her retirement in 2016, was a writer-in-residence at Middlebury College. Her work has garnered wide recognition, including a Latina Leader Award in Literature from the Congressional Hispanic Caucus Institute, the Hispanic Heritage Award in Literature, the Woman of the Year by Latina magazine, and inclusion in the New York Public Library’s program “The Hand of the Poet: Original Manuscripts by 100 Masters, from John Donne to Julia Alvarez.” In the Time of the Butterflies, with over one million copies in print, was selected by the National Endowment for the Arts for its national Big Read program, and in 2013 President Obama awarded Alvarez the National Medal of Arts in recognition of her extraordinary storytelling.

About The House of Broken Angels

In this "raucous, moving, and necessary" story by a Pulitzer Prize finalist (San Francisco Chronicle), the De La Cruzes, a family on the Mexican-American border, celebrate two of their most beloved relatives during a joyous and bittersweet weekend.

"All we do, mija, is love. Love is the answer. Nothing stops it. Not borders. Not death."

In his final days, beloved and ailing patriarch Miguel Angel de La Cruz, affectionately called Big Angel, has summoned his entire clan for one last legendary birthday party. But as the party approaches, his mother, nearly one hundred, dies, transforming the weekend into a farewell doubleheader. Among the guests is Big Angel's half brother, known as Little Angel, who must reckon with the truth that although he shares a father with his siblings, he has not, as a half gringo, shared a life.

Across two bittersweet days in their San Diego neighborhood, the revelers mingle among the palm trees and cacti, celebrating the lives of Big Angel and his mother, and recounting the many inspiring tales that have passed into family lore, the acts both ordinary and heroic that brought these citizens to a fraught and sublime country and allowed them to flourish in the land they have come to call home.

Teeming with brilliance and humor, authentic at every turn, The House of Broken Angels is Luis Alberto Urrea at his best, and cements his reputation as a storyteller of the first rank.

A finalist for the Pulitzer Prize for his landmark work of nonficiton The Devil's Highway, Luis Alberto Urrea is also the bestselling author of the novels The Hummingbird's Daughter, Into the Beautiful North, and Queen of America, as well as the story collection The Water Museum, a PEN/Faulkner Award finalist.

He has won the Lannan Literary Award, an Edgar Award, and a 2017 American Academy of Arts and Letters Award in Literature, among many other honors. Born in Tijuana to a Mexican father and American mother, he lives outside of Chicago and teaches at the University of Illinois-Chicago.

About Tigers, Not Daughters

“Move over, Louisa May Alcott! Samantha Mabry has written her very own magical Little Women for our times.” —Julia Alvarez, author of How the García Girls Lost Their Accents

In a stunning follow-up to her National Book Award-longlisted novel All the Wind in the World, Samantha Mabry weaves an aching, magical novel that is one part family drama, one part ghost story, and one part love story.

The Torres sisters dream of escape. Escape from their needy and despotic widowed father, and from their San Antonio neighborhood, full of old San Antonio families and all the traditions and expectations that go along with them. In the summer after her senior year of high school, Ana, the oldest sister, falls to her death from her bedroom window. A year later, her three younger sisters, Jessica, Iridian, and Rosa, are still consumed by grief and haunted by their sister’s memory. Their dream of leaving Southtown now seems out of reach. But then strange things start happening around the house: mysterious laughter, mysterious shadows, mysterious writing on the walls. The sisters begin to wonder if Ana really is haunting them, trying to send them a message—and what exactly she’s trying to say.

In a stunning follow-up to her National Book Award–longlisted novel All the Wind in the World, Samantha Mabry weaves an aching, magical novel that is one part family drama, one part ghost story, and one part love story.

Samantha Mabry credits her tendency toward magical thinking to her Grandmother Garcia, who would wash money in the kitchen sink to rinse off any bad spirits. She teaches writing and Latino literature at a community college in Dallas, where she lives with her husband, a historian, and a cat named Mouse. She is the author of A Fierce and Subtle Poison and All the Wind in the World. Visit her online at samanthamabry.com or on Twitter: @samanthamabry.

The House of Broken Angels (Paperback)