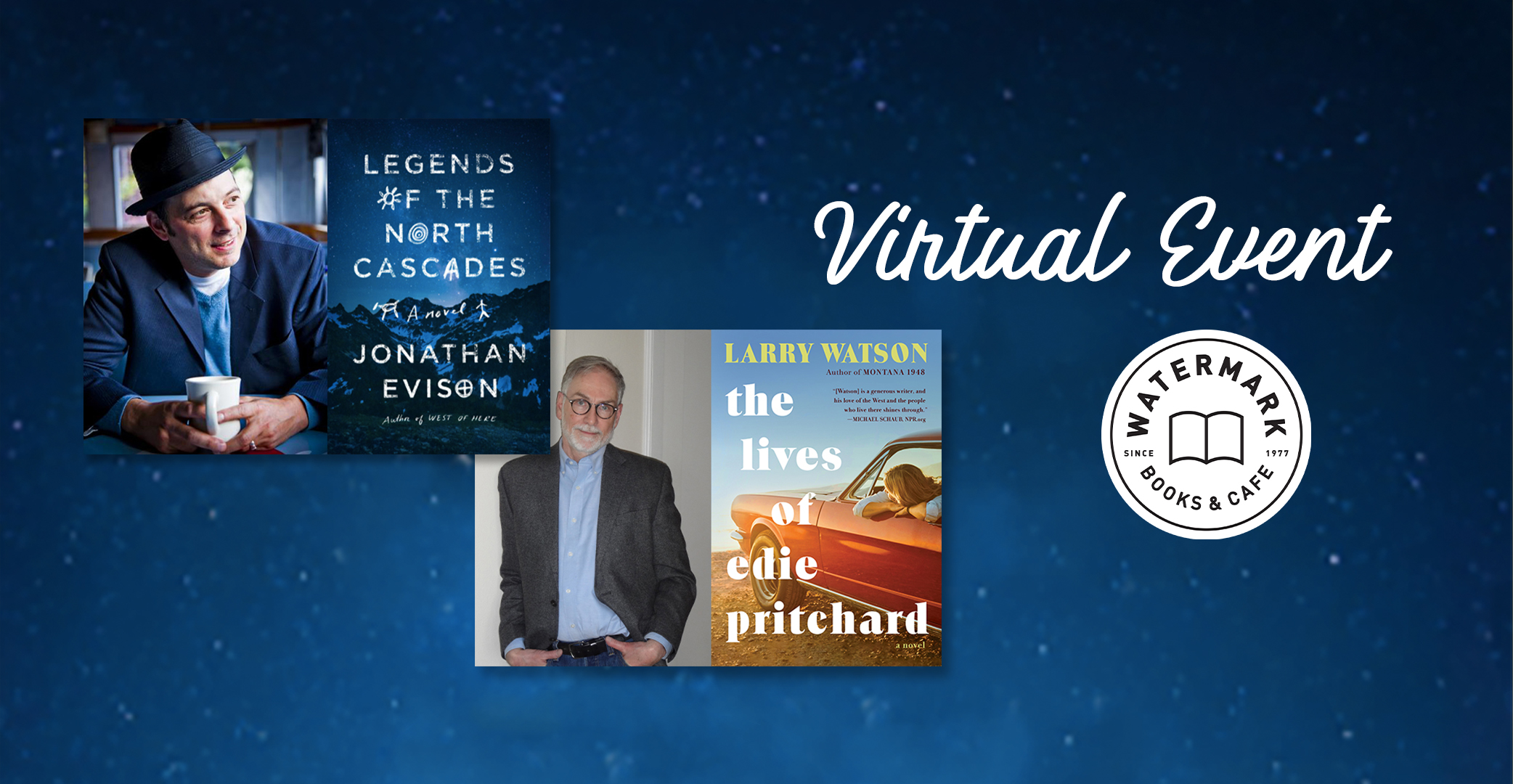 What: Watermark Books & Café invites you to attend a virtual event with author of West of Here, Jonathan Evison! Jonathan will be joining us for a virtual discussion of his new novel, Legends of the North Cascades—a beautifully rendered and cinematic portrait of a father and daughter, fleeing their damaged lives, heading off the grid to live in the wilderness of the Pacific Northwest. Jonathan will be joined in conversation with Larry Watson author of The Lives of Edie Pritchard—a multigenerational story of the West told through the history of one woman trying to navigate life on her own terms.

“A beautifully rendered and cinematic portrait of a place and its evolution through time . . . A story of survival and the love and devotion between parent and child.”
—Jill McCorkle, author of Hieroglyphics

Dave Cartwright used to be good at a lot of things: good with his hands, good at solving problems, good at staying calm in a crisis. But on the heels of his third tour in Iraq, the fabric of Dave’s life has begun to unravel. Gripped by PTSD, he finds himself losing his home, his wife, his direction. Most days, his love for his seven-year-old daughter, Bella, is the only thing keeping him going. When tragedy strikes, Dave makes a dramatic decision: the two of them will flee their damaged lives, heading off the grid to live in the wilderness of the Pacific Northwest.

As they carve out a home in a cave in that harsh, breathtaking landscape, echoes of its past begin to reach them. Bella retreats into herself, absorbed by visions of a mother and son who lived in the cave thousands of years earlier, at the end of the last ice age. Back in town, Dave and Bella themselves are rapidly becoming the stuff of legend—to all but those who would force them to return home.

As winter sweeps toward the North Cascades, past and present intertwine into a timeless odyssey. Poignant and profound, Legends of the North Cascades brings Jonathan Evison’s trademark vibrant, honest voice to bear on an expansive story that is at once a meditation on the perils of isolation and an exploration of the ways that connection can save us.

Jonathan Evison is the author of the novels All About Lulu, West of Here, The Revised Fundamentals of Caregiving, This Is Your Life, Harriet Chance!, Lawn Boy, and Legends of the North Cascades. He lives with his wife and family in Washington State.

Raised in Bismarck, North Dakota, Larry Watson is the author of ten critically acclaimed books, including the bestselling Montana 1948. His fiction has been published internationally and has received numerous prizes and awards.

Legends of the North Cascades (Hardcover)