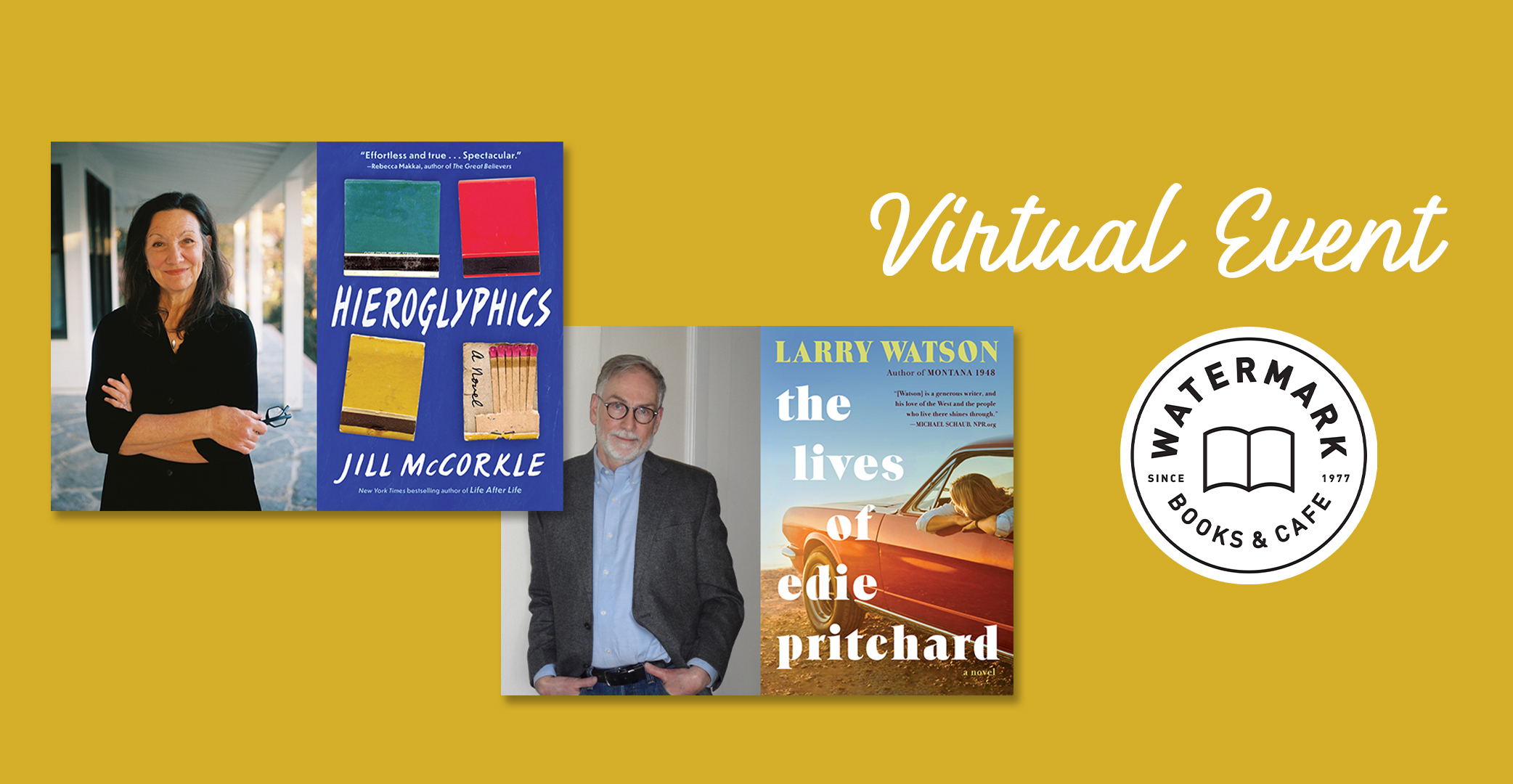 What: Watermark Books & Café invites you to attend a virtual event with award-winning Jill McCorkle! Jill will be joining us for a virtual discussion of her new novel, Hieroglyphics—a story that deconstructs and reconstructs what it means to be a father or a mother, and to be a child trying to know your parents. Jill will be joined in conversation with Larry Watson author of The Lives of Edie Pritchard—a multigenerational story of the West told through the history of one woman trying to navigate life on her own terms.

“Hieroglyphics is a novel that tugs at the deepest places of the human soul—a beautiful, heart-piercing meditation on life and death and the marks we leave on this world. It is the work of a wonderful writer at her finest and most profound.”
—Jessica Shattuck, author of The Women in the Castle

After many years in Boston, Lil and Frank have retired to North Carolina. The two of them married young, having bonded over how they both—suddenly, tragically—lost a parent when they were children. Now, Lil has become deter­mined to leave a history for their own kids. She sifts through letters and notes and diary entries, uncovering old stories—and perhaps revealing more secrets than Frank wants their children to know.

Meanwhile, Frank has become obsessed with the house he lived in as a boy on the outskirts of town, where a young single mother, Shelley, is now raising her son. For Shelley, Frank’s repeated visits begin to trigger memories of her own family, memories that she’d hoped to keep buried. Because, after all, not all parents are ones you wish to remember.

Empathetic and profound, this novel from master storyteller Jill McCorkle deconstructs and reconstructs what it means to be a father or a mother, and to be a child trying to know your parents—a child learning to make sense of the hieroglyphics of history and memory.

Jill McCorkle’s first two novels were released simultaneously when she was just out of college, and the New York Times called her “a born novelist.” Since then, she has published six novels and four collections of short stories, and her work has appeared in Best American Short Stories several times, as well as The Norton Anthology of Short Fiction. Five of her books have been New York Times Notable books, and her most recent novel, Life After Life, was a New York Times bestseller. She has received the New England Booksellers Award, the John Dos Passos Prize for Excellence in Literature, and the North Carolina Award for Literature. She has written for the New York Times Book Review, the Washington Post, the Boston Globe, Garden and Gun, the Atlantic, and other publications. She was a Briggs-Copeland Lecturer in Fiction at Harvard, where she also chaired the department of creative writing. She is currently a faculty member of the Bennington College Writing Seminars and is affiliated with the MFA program at North Carolina State University.

Raised in Bismarck, North Dakota, Larry Watson is the author of ten critically acclaimed books, including the bestselling Montana 1948. His fiction has been published internationally and has received numerous prizes and awards. His essays and book reviews have appeared in the Los Angeles Times, the Washington Post, the Chicago Sun-Times, the Milwaukee Journal Sentinel, and other periodicals. He and his wife live in Kenosha, Wisconsin. A film adaptation of Watson’s novel Let Him Go is currently in production with Kevin Costner and Diane Lane and due to release in 2020.