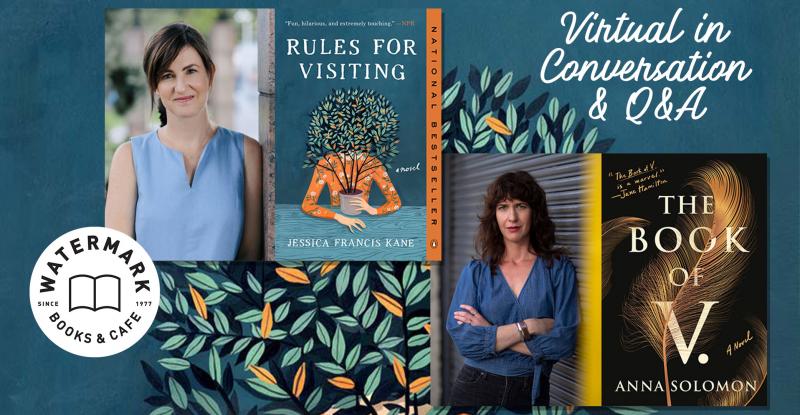 What: Watermark Books & Café invites you to attend a virtual in-conversation event with New York Times bestselling author Jessica Francis Kane and two-time Pushcart Prize-winner Anna Solomon! Jessica Francis Kane will be discussing the paperback release of her novel Rules for Visiting—An exquisite story about a woman trying to find a new way to be in the world. Anna Solomon will be discussing her newest book The Book of V—A bold, kaleidoscopic novel intertwining the lives of three women across three centuries as their stories of sex, power, and desire finally converge in the present day.

Where: This is a virtual event and will be hosted online with the help of Zoom and Facebook Live. Questions will be answered via the Zoom webinar. To register click HERE.

About Rules for Visiting

NAMED ONE OF THE BEST BOOKS OF THE YEAR BY: O Magazine * Good Housekeeping * Real Simple * Vulture * Chicago Tribune

“[A] spirit-warming saga . . . a quest for friendship that could have been written by Jane Austen’s great-great-great-granddaughter.”—O, The Oprah Magazine

Dry, witty, and unapologetic, May Attaway loves literature and her work as a botanist for the university in her hometown. More at home with plants than people, May begins to suspect she isn’t very good at friendship and wonders if it’s possible to improve with practice. Granted some leave from her job, she sets out on a journey to spend time with four long-neglected friends.

Smart, funny, and full of compassion, Rules for Visiting is the story of a search for friendship in the digital age, a singular look at the way we stay in touch. While May travels, she studies her friends’ lives and begins to confront the pain of her own.

With simplicity and honesty, Jessica Francis Kane has crafted an exquisite story about a woman trying to find a new way to be in the world. This nourishing book, with its beautiful contemplation of travel, trees, family, and friendship, is the perfect antidote to our chaotic times.

Jessica Francis Kane is the author of This Close, The Report, and Bending Heaven. This Close was longlisted for The Story Prize and the Frank O'Connor International Short Story Prize, and The Report was a Barnes & Noble Discover Great New Writers Selection and a finalist for the Flaherty-Dunnan First Novel Prize from the Center for Fiction. Her stories and essays have appeared in a number of publications, including Virginia Quarterly Review, McSweeney's, The Missouri Review, The Yale Review, A Public Space, and Granta.

About The Book of V

For fans of The Hours and Fates and Furies, a bold, kaleidoscopic novel intertwining the lives of three women across three centuries as their stories of sex, power, and desire finally converge in the present day.

Lily is a mother and a daughter. And a second wife. And a writer, maybe? Or she was going to be, before she had children. Now, in her rented Brooklyn apartment, she’s grappling with her sexual and intellectual desires, while also trying to manage her roles as a mother and a wife in 2016.

Vivian Barr seems to be the perfect political wife, dedicated to helping her charismatic and ambitious husband find success in Watergate-era Washington D.C. But one night he demands a humiliating favor, and her refusal to obey changes the course of her life—along with the lives of others.

Esther is a fiercely independent young woman in ancient Persia, where she and her uncle’s tribe live a tenuous existence outside the palace walls. When an innocent mistake results in devastating consequences for her people, she is offered up as a sacrifice to please the King, in the hopes that she will save them all.

In Anna Solomon's The Book of V., these three characters' riveting stories overlap and ultimately collide, illuminating how women’s lives have and have not changed over thousands of years.

Anna Solomon is the author of Leaving Lucy Pear and The Little Bride and a two-time winner of the Pushcart Prize. Her short fiction and essays have appeared in publications including The New York Times Magazine, One Story, Ploughshares, Slate, and more. Coeditor with Eleanor Henderson of Labor Day: True Birth Stories by Today’s Best Women Writers, Solomon was born and raised in Gloucester, Massachusetts, and lives in Brooklyn with her husband and two children.

Rules for Visiting: A Novel (Paperback)

The Book of V.: A Novel (Hardcover)