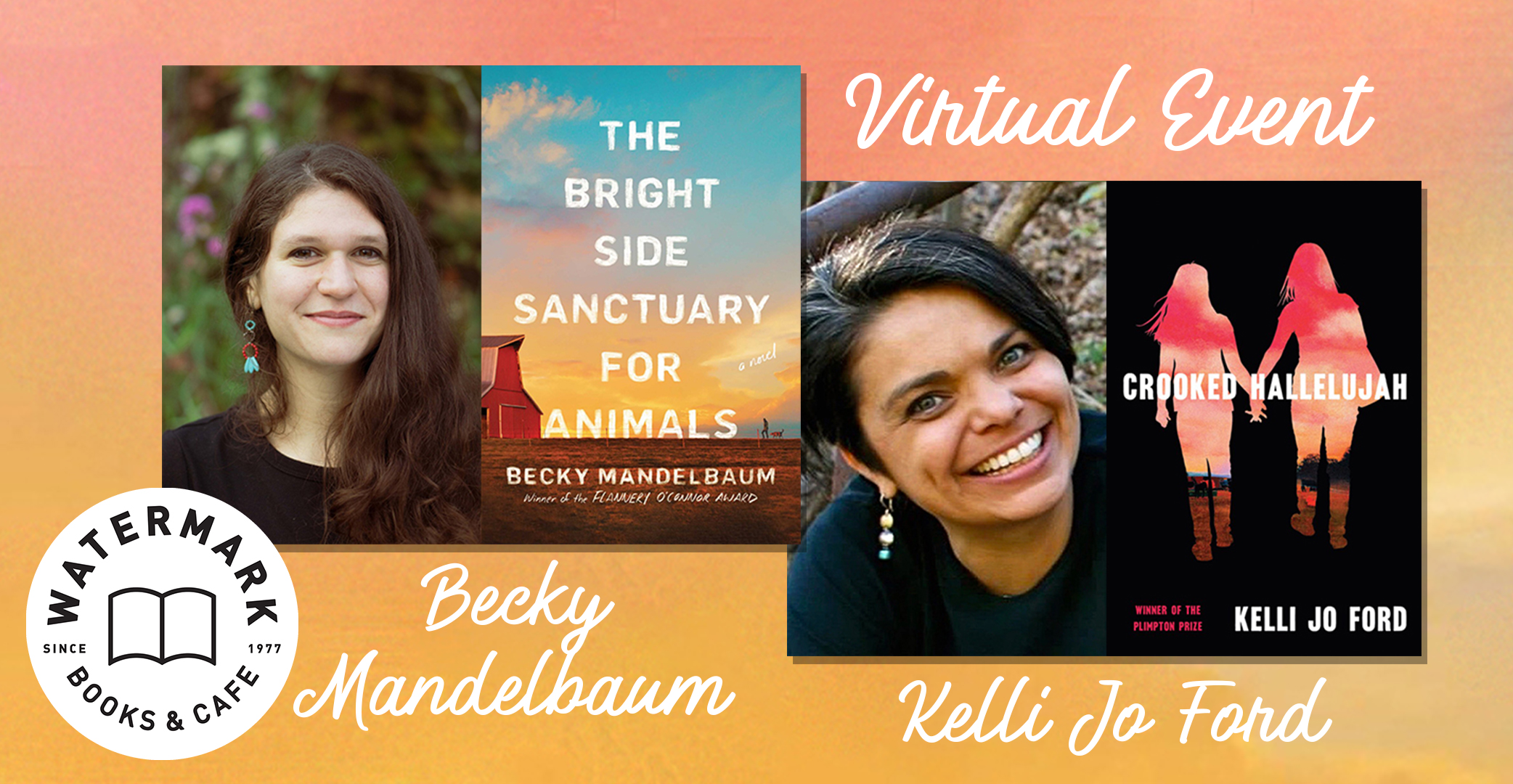 What: Watermark Books & Café invites you to attend a virtual author event with Becky Mandelbaum and Kelli Jo Ford! Both authors will join us virtually for a Q&A and discussion of their newest books. Becky will be discussing The Brightside Sanctuary for Animals—a tender and funny debut novel, set over one emotionally charged weekend at an animal sanctuary in western Kansas, where maternal, romantic, and community bonds are tested in the wake of an estranged daughter’s homecoming. Kelli Jo will be discussing her new novel Crooked Hallelujah—a big-hearted and ambitious novel of the powerful bonds between mothers and daughters by an exquisite and rare new talent.

About The Brightside Sanctuary for Animals

From the winner of the 2016 Flannery O’Connor Award for Short Fiction comes a tender and funny debut novel, set over one emotionally charged weekend at an animal sanctuary in western Kansas, where maternal, romantic, and community bonds are tested in the wake of an estranged daughter’s homecoming.

The Bright Side Sanctuary for Animals is in trouble.

It’s late 2016 when Ariel discovers that her mother Mona’s animal sanctuary in Western Kansas has not only been the target of anti-Semitic hate crimes—but that it’s also for sale, due to hidden financial ruin. Ariel, living a new life in progressive Lawrence, and estranged from her mother for six long years, knows she has to return to her childhood home—especially since her own past may have played a role in the attack on the sanctuary. Ariel expects tension, maybe even fury, but she doesn’t anticipate that her first love, a ranch hand named Gideon, will still be working at the Bright Side.

Back in Lawrence, Ariel’s charming but hapless fiancé, Dex, grows paranoid about her sudden departure. After uncovering Mona’s address, he sets out to confront Ariel, but instead finds her grappling with the life she’s abandoned. Amid the reparations with her mother, it’s clear that Ariel is questioning the meaning of her life in Lawrence, and whether she belongs with Dex or with someone else, somewhere else.

Acclaimed writer Pam Houston says that “Mandelbaum is wise beyond her years and twice as talented,” and The Bright Side Sanctuary for Animals poignantly explores the unique love and tension between mothers and daughters, and humans and animals alike. Perceptive and funny, moving and eloquent, and ultimately buoyant, Mandelbaum offers a panoramic view of family and forgiveness, and of the meaning of home. Her debut reminds us that love provides refuge, and underscores our similarities as human beings, no matter how alone or far apart we may feel.

Becky Mandelbaum is the author of Bad Kansas, winner of the 2016 Flannery O’Connor Award for Short Fiction and the 2018 High Plains Book Award for First Book. Her work has appeared in One Story, The Sun, The Missouri Review, The Georgia Review, Electric Literature, McSweeney’s Internet Tendency, and has been featured on Medium. She has received fellowships from Writing by Writers, a residency from The Helene Wurlitzer Foundation, and has taught at Seattle’s Hugo House. Originally from Kansas, she currently lives in Washington State. The Bright Side Sanctuary for Animals is her first novel.

It's 1974 in the Cherokee Nation of Oklahoma and fifteen-year-old Justine grows up in a family of tough, complicated, and loyal women, presided over by her mother, Lula, and Granny. After Justine's father abandoned the family, Lula became a devout member of the Holiness Church - a community that Justine at times finds stifling and terrifying. But Justine does her best as a devoted daughter, until an act of violence sends her on a different path forever.

Crooked Hallelujah tells the stories of Justine--a mixed-blood Cherokee woman-- and her daughter, Reney, as they move from Eastern Oklahoma's Indian Country in the hopes of starting a new, more stable life in Texas amid the oil bust of the 1980s. However, life in Texas isn't easy, and Reney feels unmoored from her family in Indian Country. Against the vivid backdrop of the Red River, we see their struggle to survive in a world--of unreliable men and near-Biblical natural forces, like wildfires and tornados--intent on stripping away their connections to one another and their very ideas of home.

In lush and empathic prose, Kelli Jo Ford depicts what this family of proud, stubborn, Cherokee women sacrifice for those they love, amid larger forces of history, religion, class, and culture. This is a big-hearted and ambitious novel of the powerful bonds between mothers and daughters by an exquisite and rare new talent.

Kelli Jo Ford is a citizen of the Cherokee Nation of Oklahoma. She is the recipient of numerous awards and fellowships, including the Paris Review's Plimpton Prize, the Everett Southwest Literary Award, the Katherine Bakeless Nason Award at Bread Loaf, a National Artist Fellowship by the Native Arts & Cultures Foundation, and a Dobie Paisano Fellowship. Her fiction has appeared in The Paris Review, Virginia Quarterly Review, The Missouri Review, and the anthology Forty Stories: New Writing from Harper Perennial, among other places.

The Bright Side Sanctuary for Animals: A Novel (Hardcover)