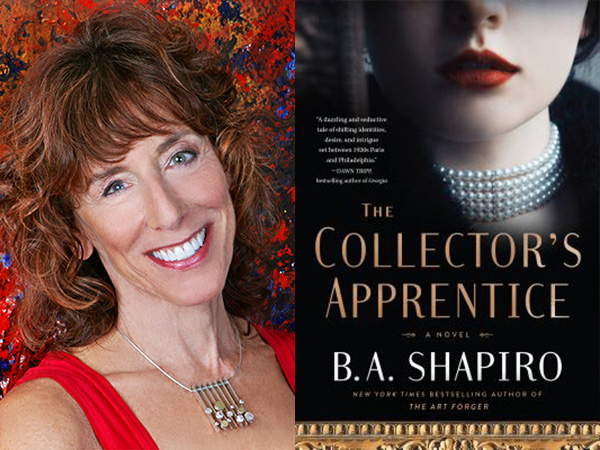 Watermark Books & Cafe will host B.A. Shapiro for an author talk and signing of her novel The Collector's Apprentice on Wednesday, February 6 at 6:00 p.m. The event will take place at the Ulrich Museum of Art on the Wichita State University campus.

FROM THE BESTSELLING AUTHOR OF THE ART FORGER AND THE MURALIST

"Dazzling and seductive, a tour de force, The Collector's Apprentice is an exhilarating tale of shifting identities, desire, and intrigue set between 1920s Paris and Philadelphia."--Dawn Tripp, bestselling author of Georgia

Staff Reviews
In B.A. Shapiro's The Collector's Apprentice, Paulien Mertens, a victim of passion, is shunned by her well-to-do family when the love of her life, George Everard, turns out to be a conman. Forced to flee her family estate and abandon the close relationship she developed with her father, Paulien moves to Paris with only enough to last her a few months. There, she feels the far-reaching effects of the long-con, and she must reinvent herself; she becomes Vivienne Gregsby. Her knowledge of fine art – the interest she shared with her father – lands her a job with an eccentric American, Edwin Bradley.

Starting a new life, helping Edwin curate a collection of abstract artwork, and moving to Philadelphia keep Vivienne distracted from what she's lost. She hasn't forgotten, though, and neither has she forgotten who put her in the predicament in the first place.

Shapiro writes deftly of the art that Vivienne collects with Edwin, describing the color, movement, and composition of each piece: the reader can "see" the works of Henri Matisse as if standing in a museum opposite each painting. Matisse as a man is fleshed out so thoroughly that he becomes as vivid to the reader as the paintings Shapiro describes; he's confident with women, sometimes uncertain with his painting, always full of desire. Among other memorable characters are Gertrude and Leo Stein.

Roughly based on a true story, Shapiro has done a quality job of retelling a tale of art, intrigue, and murder. The novel's twists make the reader question Vivienne's reliability as a narrator, and the turns make the reader wonder which "collector" Vivienne apprentices in the end.

November 2018 Indie Next List
"What enormous fun Barbara Shapiro had in constructing this mini-universe of arts, artists, collectors, and grifters. Loosely based on Barnes Foundation founder Albert C. Barnes and his assistant, Shapiro's fictional pair — Edwin Bradley, the collector, and the lovely but unlucky Paulien Mertens — flit from Europe to Pennsylvania and back in the 1920s. The joy of The Collector's Apprentice is infectious as the reader is introduced to the salon of Gertrude Stein and becomes a voyeur of a passionate affair involving the great philanderer Henri Matisse. The Roaring Twenties, a whiff of the Talented Mr. Ripley, and a pinch of sex, murder, and mystery are the ingredients of this art thriller. With her bold brush strokes and vivid colors, Shapiro has created a Gauguin of a novel."
— Darwin Ellis, Books on the Common, Ridgefield, CT

It's the summer of 1922, and nineteen-year-old Paulien Mertens finds herself in Paris—broke, disowned, and completely alone. Everyone in Belgium, including her own family, believes she stole millions in a sophisticated con game perpetrated by her then-fiancé, George Everard. To protect herself from the law and the wrath of those who lost everything, she creates a new identity, a Frenchwoman named Vivienne Gregsby, and sets out to recover her father's art collection, prove her innocence—and exact revenge on George.

When the eccentric and wealthy American art collector Edwin Bradley offers Vivienne the perfect job, she is soon caught up in the Parisian world of post-Impressionists and expatriates—including Gertrude Stein and Henri Matisse, with whom Vivienne becomes romantically entwined. As she travels between Paris and Philadelphia, where Bradley is building an art museum, her life becomes even more complicated: George returns with unclear motives . . . and then Vivienne is arrested for Bradley's murder.

B. A. Shapiro has made the historical art thriller her own. In The Collector's Apprentice, she gives us an unforgettable tale about the lengths to which people will go for their obsession, whether it be art, money, love, or vengeance.

About the Author
B. A. Shapiro is the author of the award-winning New York Times bestseller The Art Forger and the bestseller The Muralist. She has taught sociology at Tufts University and creative writing at Northeastern University and lives in Boston with her husband, Dan, and their dog, Sagan. Her website is www.bashapirobooks.com.

Praise For...
"Shapiro delivers a clever and complex tale of art fraud, theft, scandal, murder, and revenge. [Her] portrayal of the 1920s art scene in Paris and Philadelphia is vibrant, and is populated by figures like Alice B. Toklas and Thornton Wilder; readers will be swept away by this thoroughly rewarding novel."
—Publishers Weekly

"B.A. Shapiro is back with a platinum potion of art, love, and scandal, set against the big backdrop of Paris between the wars. If you can put The Collector's Apprentice down, you're made of stronger stuff than I am. I read it in one sumptuous sitting. This is a big story, from a big talent."
—Jacquelyn Mitchard, author of The Deep End of the Ocean

"Dazzling and seductive, The Collector's Apprentice is a tour de force—an exhilarating tale of shifting identities, desire, and intrigue set between 1920s Paris and Philadelphia. Shapiro is a master at melding historical and fictional characters to bring the past alive on the page, and in The Collector's Apprentice she has forged an exquisite, multilayered story that maps the cogent and singular fire of a young woman's ambition and the risks she will take for the sake of art."
—Dawn Tripp, bestselling author of Georgia

"I was engrossed in every twist and turn in this compulsively captivating page-turner, all the way until its astonishing denouement. Shapiro has done it again!"
—Thrity Umrigar, bestselling author of The Space Between Us

The Collector’s Apprentice: A Novel (Hardcover)

The Muralist: A Novel (Paperback)

The Art Forger: A Novel (Paperback)