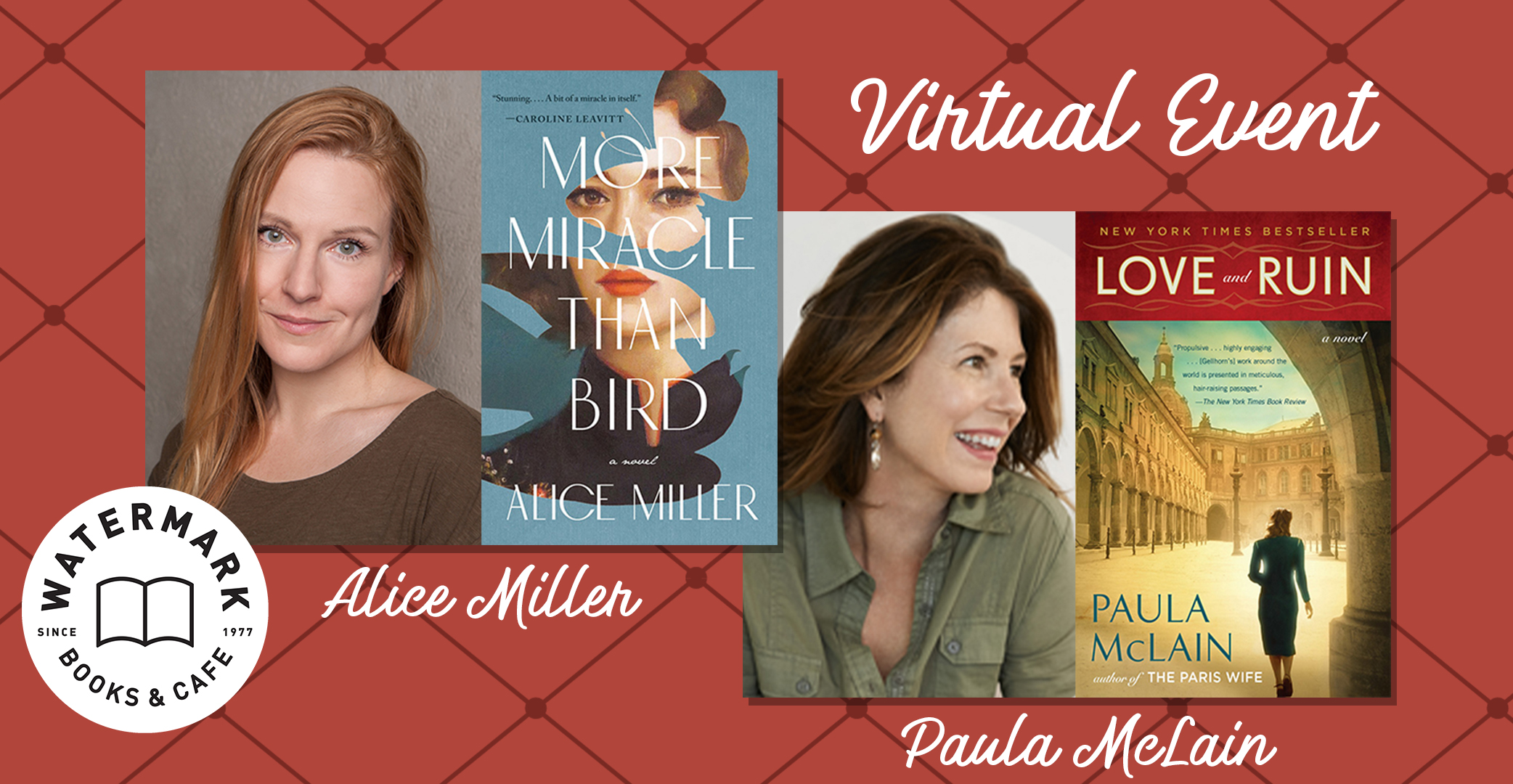 What: Watermark Books & Café invites you to attend a virtual author event with debut author Alice Miller and Paula McLain, the New York Times bestselling authors of The Paris Wife! Both authors will join us virtually for a Q&A and discussion of their newest books Alice Miller will be discussing her debut novel More Miracle Than Bird—a sweeping debut charting the love story of two of literature’s most fascinating characters: Georgie Hyde-Lees and her husband, W. B. Yeats. Paula McLain will be discussing her most recent novel Love and Ruin—the story of Martha Gellhorn—a fiercely independent, ambitious woman ahead of her time, who would become one of the greatest war correspondents of the twentieth century.

About More Miracle Than Bird

For fans of Paula McLain’s The Paris Wife and Amor Towles’s Rules of Civility, Alice Miller's sweeping debut novel charts the love story of two of literature’s most fascinating characters: Georgie Hyde-Lees and her husband, W. B. Yeats.

On the eve of World War I, twenty-one-year-old Georgie Hyde-Lees—on her own for the first time—is introduced to the acclaimed poet W. B. Yeats at a soirée in London. Although Yeats is famously eccentric and many years her senior, Georgie is drawn to him, and when he extends a cryptic invitation to a secret society, her life is forever changed.

A shadow falls over London as zeppelins stalk overhead and bombs bloom against the skyline. Amidst the chaos, Georgie finds purpose tending to injured soldiers in a makeshift hospital, befriending the wounded and heartbroken Lieutenant Pike, who might need more from her than she is able to give. At night, she escapes with Yeats into a darker world, becoming immersed in the Order, a clandestine society where ritual, magic, and the conjuring of spirits is practiced and pursued. As forces—both of this world and the next—pull Yeats and Georgie closer together and then apart, Georgie uncovers a secret that threatens to undo it all.

In bright, commanding prose, debut author Alice Miller illuminates the fascinating and unforgettable courtship of Georgie Hyde-Lees and W. B. Yeats. A sweeping tale of faith and love, lost and found and fought for, More Miracle than Bird ingeniously captures the moments—both large and small—on which the fates of whole lives and countries hinge.

Alice Miller is a graduate of the Iowa Writers’ Workshop and the International Institute of Modern Letters. She is on the faculty of the MFA program at Cedar Crest College.

About Love and Ruin

In 1937, twenty-eight-year-old Martha Gellhorn travels alone to Madrid to report on the atrocities of the Spanish Civil War and becomes drawn to the stories of ordinary people caught in the devastating conflict. It’s her chance to prove herself a worthy journalist in a field dominated by men. There she also finds herself unexpectedly—and unwillingly—falling in love with Ernest Hemingway, a man on his way to becoming a legend.

On the eve of World War II, and set against the turbulent backdrops of Madrid and Cuba, Martha and Ernest’s relationship and careers ignite. But when Ernest publishes the biggest literary success of his career, For Whom the Bell Tolls, they are no longer equals, and Martha must forge a path as her own woman and writer.

Heralded by Ann Patchett as “the new star of historical fiction,” Paula McLain brings Gellhorn’s story richly to life and captures her as a heroine for the ages: a woman who will risk absolutely everything to find her own voice.

Paula McLain is the New York Times bestselling author of the novels Love and Ruin, Circling the Sun, The Paris Wife, and A Ticket to Ride, the memoir Like Family: Growing Up in Other People’s Houses, and two collections of poetry. Her writing has appeared in The New York Times, Good Housekeeping, O: The Oprah Magazine, Town & Country, The Guardian, The Huffington Post, and elsewhere. She lives in Ohio with her family.

Love and Ruin: A Novel (Paperback)