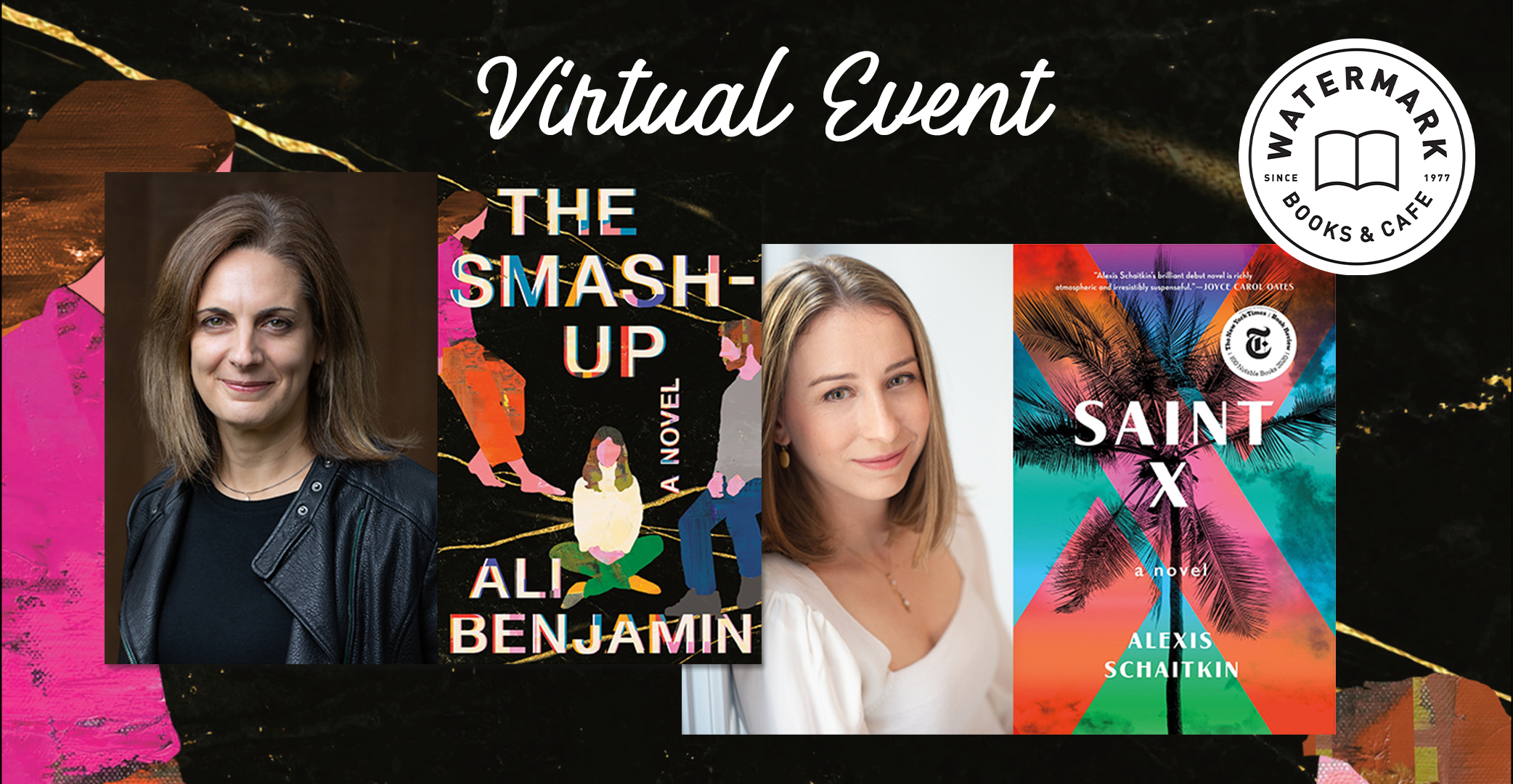 What: Watermark Books & Café invites you to attend a virtual event with the bestselling author of the National Book Award Finalist The Thing About Jellyfish! Ali Benjamin will be joining us for a virtual discussion of her first adult novel The Smash-Up—A marriage spirals out of control when the issues of our day—cultural, political, and social—becoming intensely personal in this fresh, whip-smart novel for readers of Meg Wolitzer and Fleishman Is in Trouble. Ali will be joined in conversation by Alexis Schaitkin the bestselling author of Saint X—A haunting portrait of grief, obsession, and the bond between two sisters never truly given the chance to know one another.

It’s September 2018. In Washington, D.C.,—and in cities and towns across America—women have taken to the streets to protest a Supreme Court nominee. And in Starkfield, Massachusetts—a sleepy rural town where nothing much ever happens—Ethan Frome’s otherwise quiet life has turned upside down.

His wife, Zo, is so enraged by the national political scene that she’s transformed their home into a local headquarters for the Resistance. His college roommate and former business partner faces #metoo allegations, sending Ethan into increasingly desperate financial straits. His unruly, headstrong daughter, Alex, grows more challenging by the day.

Enter Maddy Silver—a breezy, blue-haired millennial making her way through the gig economy. Suddenly Ethan and Zo must question everything: their past, their future, their marriage, and what they value most. And all the while, a world-rocking cultural smash-up inches ever closer to home.

Inspired by a classic Edith Wharton novella about a strained marriage in a small town, The Smash-Up is at once an intimate, moving portrait of a family in distress, a vivid examination of our roiling national rancor, and a powerful exploration of how the things we fail to notice can shatter a family, a community, and a nation.

Ali Benjamin is the author of the young adult novel The Thing About Jellyfish, an international bestseller and a National Book Award finalist. Her The Next Great Paulie Fink was named a top children’s book of the year by Kirkus Reviews, Publishers Weekly, the New York Public Library, and the Los Angeles Public Library. Her work has been published in more than twenty-five languages in more than thirty countries. Originally from the New York City area, she now lives in Massachusetts. This is her first adult novel.

"'Saint X' is hypnotic. Schaitkin's characters...are so intelligent and distinctive it feels not just easy, but necessary, to follow them. I devoured [it] in a day."
–Oyinkan Braithwaite, New York Times Book Review

When you lose the person who is most essential to you, who do you become?

Hailed as a “marvel of a book” and “brilliant and unflinching,” Alexis Schaitkin’s stunning debut, Saint X, is a haunting portrait of grief, obsession, and the bond between two sisters never truly given the chance to know one another.

Claire is only seven years old when her college-age sister, Alison, disappears on the last night of their family vacation at a resort on the Caribbean island of Saint X. Several days later, Alison’s body is found in a remote spot on a nearby cay, and two local men–employees at the resort–are arrested. But the evidence is slim, the timeline against it, and the men are soon released. The story turns into national tabloid news, a lurid mystery that will go unsolved. For Claire and her parents, there is only the return home to broken lives.

Years later, Claire is living and working in New York City when a brief but fateful encounter brings her together with Clive Richardson, one of the men originally suspected of murdering her sister. It is a moment that sets Claire on an obsessive pursuit of the truth–not only to find out what happened the night of Alison’s death but also to answer the elusive question: Who exactly was her sister? At seven, Claire had been barely old enough to know her: a beautiful, changeable, provocative girl of eighteen at a turbulent moment of identity formation.

As Claire doggedly shadows Clive, hoping to gain his trust, waiting for the slip that will reveal the truth, an unlikely attachment develops between them, two people whose lives were forever marked by the same tragedy.

For readers of Emma Cline’s The Girls and Lauren Groff’s Fates and Furies, Saint X is a flawlessly drawn and deeply moving story that culminates in an emotionally powerful ending.

Alexis Schaitkin’s short stories and essays have appeared in Ecotone, Southwest Review, The Southern Review, The New York Times, and elsewhere. Her fiction has been anthologized in The Best American Short Stories and The Best American Nonrequired Reading. She received her MFA in fiction from the University of Virginia, where she was a Henry Hoyns Fellow. She lives in Williamstown, Massachusetts, with her husband and son. Saint X is her debut novel.

The Smash-Up: A Novel (Hardcover)