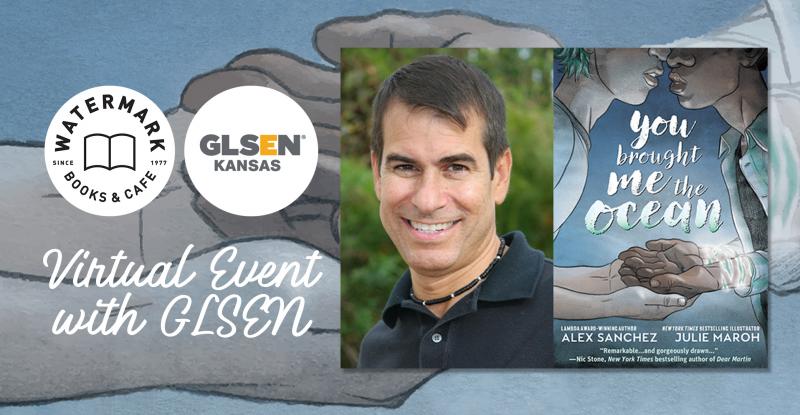 What: Watermark Books & Café invites you to attend a virtual author event with the Lambda Award-winning author of Rainbow Boys! Alex Sanchez will be in conversation with the Kansas Chapter of GLSEN to discuss his new book You Brought Me the Ocean—a new coming-out romance set against the backdrop of the DC Universe.

Where: This is a virtual event and will be hosted online with the help of Zoom and Facebook Live. Attendee questions will be answered via the Zoom webinar.

Jake Hyde doesn't swim--not since his father drowned. Luckily, he lives in Truth or Consequences, New Mexico, which is in the middle of the desert. And yet he yearns for the ocean and is determined to leave his hometown for a college on the coast. But his best friend, Maria, wants nothing more than to make a home in the desert, and Jake's mother encourages him to always play it safe.

But there's nothing "safe" about Jake's future--not when he's attracted to Kenny Liu, swim team captain and rebel against conformity. And certainly not when he secretly applies to Miami University. Jake's life becomes a reflection of the name of his small town--does he live his truth and face the consequences?

Jake is full of secrets, including the strange blue markings on his skin that glow when in contact with water. What power will he find when he searches for his identity, and will he turn his back to the current or dive headfirst into the waves?

Alex Sanchez has published eight novels, including the American Library Association "Best Book for Young Adults" Rainbow Boys and the Lambda Award-winning So Hard to Say.

He has a master's degree in guidance and counseling and worked for many years as a youth and family counselor.

Julie Maroh is a French writer and illustrator of graphic novels. They wrote and illustrated the New York Times bestselling Blue Is the Warmest Color about the life and love of two young lesbians, which has been adapted into an award-winning film.

After having obtained an applied arts baccalauréat at E.S.A.A.T in Roubaix, Maroh continued their studies in Brussels, where they lived for eight years. They earned two diplomas there, in Visual Arts (comics option) in the Institut Saint-Luc and in Lithography/Engraving at the Académie Royale des Beaux-Arts of Brussels.

GLSEN Kansas is a chapter of GLSEN, a national organization fighting for every student’s right to a safe, supportive education.

GLSEN Kansas is a grassroots initiative, working locally in our community to ensure safe schools for all students, regardless of sexual orientation and gender identity. There are 43 Chapters around the country doing this important work. Join us today!

Our chapter supports students and educators locally, organizes around LGBTQ-affirming public policy, plans teacher trainings, and hosts events for students, educators, parents, and allies. Chapters like ours play an important role in bringing GLSEN’s programs and visions to right where we live, work, and learn. While some chapters have full-time or part-time staff, most are entirely volunteer-based. We're always looking for new volunteers to help us ensure safe schools for all students.

Explore our website to find out more about our work here in Kansas and to learn about how you can get involved in local and national events.

You Brought Me The Ocean (Paperback)