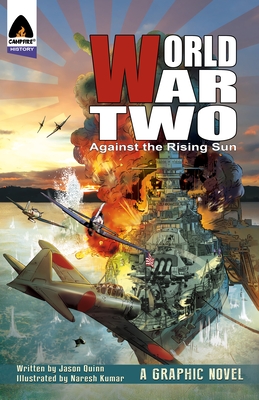 Campfire's World War II: Against The Rising Sun focuses on the war in the East, through the eyes of the servicemen and civilians on both sides of the conflict. From the invasion of Manchuria by Japan in 1937, right through to the dropping of the atomic bombs on Hiroshima and Nagasaki, we witness the end of the British Empire, the rise and fall of Japan and destruction the likes of which the world must never know again.

While authoritative texts on World War Two often tend to focus disproportionately on the European theater of war, the Pacific theater was no less dramatic, with its roots stretching back to the early 1930s. This book tells the history of World War Two in the Pacific theater, told from many perspectives.
Jason Quinn is the award winning author of Campfire's Steve Jobs: Genius by Design and Gandhi: My Life is My Message. He learned to read with Marvel Comics and was devastated when his teacher told him Spider-Man did not exist. He has worked in publishing for the last twenty years as an editor and writer, working on everything from Spider-Man to Barbie. He worked as Campfire's Creative Content Head from 2012 to 2014. His other Campfire titles include Little Alien, Genesis: From Creation to the Flood, The Beautiful Game and many others.
A resident of New Delhi, India, Naresh Kumar describes himself as a seeker who is continuously trying to learn as much as he can, and his art is an expression of his curiosity towards the world. A firm believer in humanity, Naresh brings an experienced hand to the drawing board, and his photo-realistic style captures the subtle emotions of his characters. His work features in a number of titles from Campfire, which include Julius Caesar, Martin Luther King, and Sinbad: The Legacy.
"A well-considered and balanced account of the horrors of WW2 in the East as Japan and the Allied Forces fought for control of territory. From the startlingly effective embossed cover depicting a kamikaze air attack to the evocative photo journalistic style inside the reader is engaged from the start.… Campfire makes history come dazzlingly alive with this title… Action packed, graphically arresting, thought provoking and dramatically disturbing.” — The School Librarian