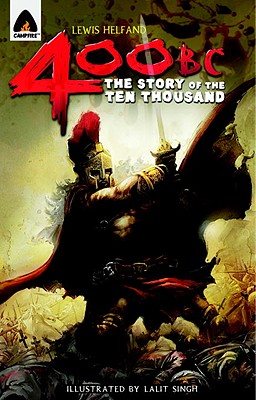 This is book number 5 in the Campfire Graphic Novels series.

They were an unstoppable force, hired to take the crown from the King of Persia. They were a fearless army of Greek soldiers, and one hundred thousand men fighting as one. They were led by the finest and most courageous generals in all of Greece. They were being led to unimaginable wealth, but that was days ago.

Now their leaders are dead and their army has scattered. Now their numbers have fallen to ten thousand and nothing remains but fear. Now they are men praying not for victory, but for the slim chance of living one more day.

Cut off by impassable terrain and pursued by an army of one million enemy soldiers; they must stand together to survive. To find their way home, one of their own must lead them. And to live one more day...

...they must fight.
Lewis Helfand was born on April 27, 1978 in Philadelphia. With a political science degree and a passion for comic books, Lewis's first comic book was Wasted Minute, the story of a world without crime where superheroes are forced to work regular jobs. With the first issue well received, he was soon collaborating with other artists and released four more issues over the next few years.
Lewis continues to work as a freelance writer and reporter for a number of national print and online publications.
"I highly recommend Campfire’s comics. They do what they are intended to do and do it in  a way that excites kids about classic literature."

— Chris Wilson, The Graphic Classroom (a resource for teachers and librarians)