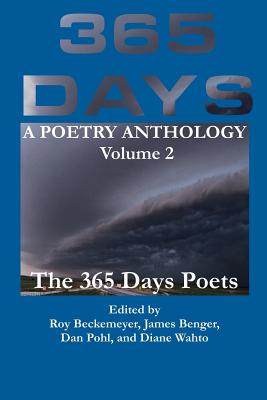 
Available to order! Usually Ships to Store in 3-5 Days.
(This book is not returnable.)
Back in 2015, James Benger decided to put a process into place to make his writing more consistent. He made a New Year's resolution to write a poem a day for a year. To help make the resolution stick, he established a closed Facebook group and asked some writers he knew if they were interested. Soon over 200 participants were involved. In 2016 the fruits of this effort were celebrated in the first volume of 365 Days: A Poetry Anthology, which the four editors put together from poems submitted by a small core group of members who wished to participate. Here we are at it again. We hope you enjoy the poems collected here. They are the result of The James Benger System of Consistent Writing, otherwise known as 365 Poems in 365 Days. In 365 Days, Volume 2: A Poetry Anthology 18 poets contribute 76 poems collected by editors Roy Beckemeyer, James Benger, Dan Pohl, and Diane Wahto. Jeanette Powers, author of Perfectly Good Muses, says of 365 Days Volume 2: "The 365 Days poetry project is an illustration of conviction and community coming together and creating something exquisite in both its ambition and content. This online group, writing daily, generates a tremendous amount of creative energy and this anthology displays the grand result. Occasionally infused with the group's comments, the reader is delighted to be included in the fun. Poems, pastoral, micro, narrative, absurd, and intimate, play over the pages in perfect concerto of how a year of one's own life passes: with highs and lows, sighs and bellows." Shawn Pavey, author of Nobody Steals Towels from a Motel 6, says of 365 Says Volume 2: "...a delightful read full of great moments from established and emerging poets...among the many bright spots in this collection...Paul Koniecki ('Carry the sun in your arms to a safe house / and leave it in an unmade bed of pillows and down, other / minor ceelestial objects, and soft music from a turntable in the / corner of another room').
Editors: Roy J. Beckemeyer is a retired engineer and scientific journal editor who lives in Wichita, Kansas. His poems have appeared in half a dozen anthologies as well as in many print and on-line literary journals. His first book of poetry, Music I Once Could Dance To (Coal City Press, Lawrence, KS, 2014) was selected as a 2015 Kansas Notable Book. He recently co-edited (with Caryn Mirriam-Goldberg) Kansas Time+Place: An Anthology of Heartland Poetry (Little Balkans Press, Pittsburg, KS, 2017). His chapbook of ekphrastic poems, Amanuensis Angel, published in 2018 by Spartan Press of Kansas City, MO, is comprised of poems that first appeared on the 365 Days Facebook page. James Benger is a father, husband and writer. His work has been featured in several publications. He is the author of two fiction ebooks: Flight 776 (2012) and Jack of Diamonds (2013), and two chapbooks of poetry: As I Watch You Fade (EMP 2016) and You've Heard It All Before (GigaPoem 2017). He is a member of the River-front Readings Committee in Kansas City where he lives in with his wife and son. Dan Pohl is a full professor of English composition at Hutchinson Community College in Hutchinson, Kansas. His first book of poetry, illustrated by his daughter Jessie, Autochthonous: Found in Place published by Woodley Memorial Press in 2013; it won the Kansas Authors Club 2014 Nelson Poetry Book Award. His second book, also illustrated by Jessie, is Anarchy and Pancakes (Spartan Press, 2018). He lives in Moundridge, Kansas. A sampling of his poems is online at kansaspoets.com. He has self-published two chap-books: Spring House and Unpaved Roads. Diane Wahto started writing poetry in 1983 when she entered the Wichita State University MFA creative writing program. Her poem, "Somebody Is Always Watching," won the American Academy of Poets award in 1985 and was published in the AID Review. Her work has been published in various journals and magazines, and she has won awards from Kansas Voices and Kansas Authors Club, among others. Diane was co-editor of the first edition of 365 Days: A Poetry Anthology. Her poem, "A Blank Sheet of Paper," was selected for the Jan. 22, 2018, edition of Heartland: Poetry of Love, Resistance, & Solidarity. The poem, "Empty Corners," was published in the spring issue of Same, a literary journal. Diane lives in Wichita, Kansas, with her husband Patrick Roche and their dog Annie.