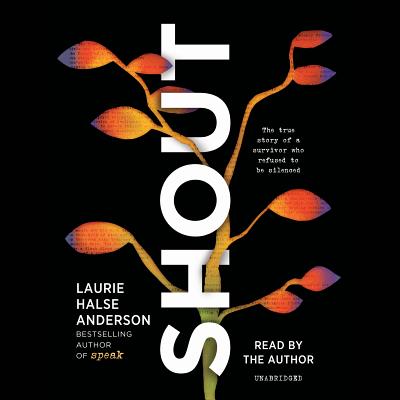 The powerful,
moving,
heartbreaking,
anger-inducing,
incredibly relevant
and beautiful
story of how
Anderson found her voice
throughout her life -- it wasn't
an overnight "change" --
after being raped,
which became the inspiration
for Speak.
A book that will
MOST DEFINITELY
stay with me
for a
long
long
time.

“Laurie Halse Anderson invites readers not to speak but to shout in her new poetry memoir, a long-awaited follow-up to her bestselling YA novel Speak, which centers around a survivor of sexual assault. In SHOUT, Anderson shares memories from her young adulthoodwhen she herself was raped and how she found the strength to keep going. Between autobiographical poems lie fierce rants about rape culture and censorship, as well as love letters and encouragement to survivors of sexual assault. SHOUT is a fist raised to the sky, arriving on the heels of #MeToo and urging readers to never be silenced. A must-read.”
— Mary Wahlmeier, Raven Book Store, Lawrence, KS

A New York Times bestseller and one of 2019's best-reviewed books, a poetic memoir and call to action from the award-winning author of Speak, Laurie Halse Anderson!

Bestselling author Laurie Halse Anderson is known for the unflinching way she writes about, and advocates for, survivors of sexual assault. Now, inspired by her fans and enraged by how little in our culture has changed since her groundbreaking novel Speak was first published twenty years ago, she has written a poetry memoir that is as vulnerable as it is rallying, as timely as it is timeless. In free verse, Anderson shares reflections, rants, and calls to action woven between deeply personal stories from her life that she's never written about before. Described as "powerful," "captivating," and "essential" in the nine starred reviews it's received, this must-read memoir is being hailed as one of 2019's best books for teens and adults. A denouncement of our society's failures and a love letter to all the people with the courage to say #MeToo and #TimesUp, whether aloud, online, or only in their own hearts, SHOUT speaks truth to power in a loud, clear voice-- and once you hear it, it is impossible to ignore.

Laurie Halse Anderson is a New York Times bestselling author whose writing spans young readers, teens, and new adults. Combined, her books have sold more than 8 million copies. She has been twice nominated for the Astrid Lindgren Memorial Award. Two of her books, Speak and Chains, were National Book Award finalists, and Chains was short-listed for the prestigious Carnegie medal. Laurie was selected by the American Library Association for the 2009 Margaret A. Edwards Award and has been honored for her battles for intellectual freedom by the National Coalition Against Censorship and the National Council of Teachers of English.

In addition to combating censorship, Laurie regularly speaks about the need for diversity in publishing. She lives in Philadelphia, where she enjoys cheese steaks while she writes. Find out more about Laurie by following her on Twitter at @halseanderson, Instagram at halseanderson, Facebook at writerlady, and Pinterest at halseanderson.

"Anderson’s prose is so gorgeous . . . that at times the book needs to be put down to absorb her utter mastery of language."—Entertainment Weekly

★ "In this powerful memoir told in free verse, Anderson delves into her past. . .Her potent words and willingness to shout her message are proof of the soundness of that advice." —Publishers Weekly, starred review

★ "A captivating, powerful read about clawing your way out of trauma, reclaiming your body,and undoing lifetimes of lessons in order to use your voice as the weapon it is. Fervent and deafening." —Booklist, starred review

★ "Readers new to Anderson will find this accessible. It's a strong example of how lived experience shapes art and an important book for the #MeToo movement." —Kirkus Reviews, starred review

★ “A praise song to survivors, a blistering rebuke to predators, and a testament to the healing power of shared stories.”  —The Horn Book, starred reivew

★ "Will ring out to readers who themselves believe in the power of stories." —Bulletin of the Center for Children’s Books, starred review

★ "In searing free verse, Anderson unloads decades of trauma on these pages . . . Longtime Anderson fans will appreciate this deeply personal look into how the author chan­neled her pain into the writing of Speak, and readers new to her work will be swept up in her singular style, which melds bold honesty with fluttering moments of lyrical beauty." —Bookpage, starred review

★ "More than a gifted writer, Anderson is an advocate for anyone who feels alienated. Her sensitive, incisive book is essential for all young people." —School Library Journal, starred review

★ "Poetry is very often written to be heard, and this collection in particular ought to be heard—spoken proudly by Anderson, outloud, and at full volume." —Booklist review of the audio edition, starred review

"With Speak, Anderson opened the door for more novels exploring the deeply felt and deeply personal aftermath of sexual violence. SHOUT serves as both a testament to the life-altering, lifesaving impact of these types of stories — and as an urgent and brutal reminder of their ongoing necessity." —The New York Times Book Review

"A powerful testament that bears witness not just to [Anderson's] own pain, and the pain of others similarly abused, but also to the power of speaking persistently, time and time again, about topics that most people don't want to hear." --The Los Angeles Review of Books


"An absolutely essential read for teenagers and the people who know them." --Refinery29