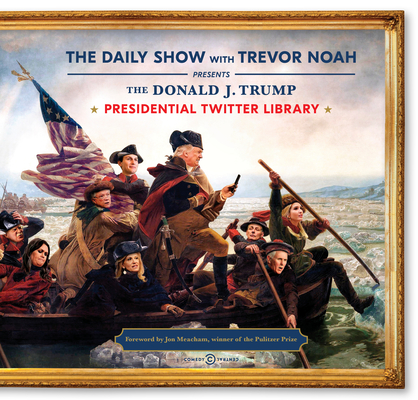 By The Daily Show With Trevor Noah, Jon Meacham (Foreword by)
$22.00
Temporarily Out of Stock. Usually Ships in 3-5 Days.

NEW YORK TIMES BESTSELLER • As seen on The Daily Show: an illustrated portrait of the Donald J. Trump Twitter account, with analysis and “scholarly” commentary from the writers of The Daily Show and an introduction by Trevor Noah

In June 2017, just steps from Trump Tower in midtown Manhattan, The Daily Show with Trevor Noah opened The Donald J. Trump Presidential Twitter Library, a 4,000-square-foot museum space that gave the 45th president and his amazing Twitter legacy the respect they deserve. In the single weekend it was open to the public, the Library pop-up drew 7,500 visitors and had to turn away countless others.

But the Presidential Twitter Library experience should not be limited to the elite coastal few. Not fair! All citizens, even the Mexican ones, should have the chance to see Donald Trump’s tweets in their rightful context—organized and commented on in the fearless, hilarious, insightful voice of The Daily Show.

This one-of-a-kind exhibition catalog presents the Library’s complete contents, including:

• The Masterpieces: In-depth critical appreciations of history’s most important Trump tweets, from “Very Stable Genius” to “Covfefe” to “Trump Tower Taco Bowl/I Love Hispanics!”
• The Greatest Battles: @realDonaldTrump’s brutal Twitter campaigns against fellow Republicans, Diet Coke, women generally, and Kristen Stewart specifically
• Sad! A Retrospective: a compendium of the many people, events, and twists of fate that apparently made Donald Trump feel this human emotion
• Trumpstradamus: DJT’s amazing 140-character predictions—none of which came true!
• The Hall of Nicknames: the greatest of Trump’s monikers, from “Lyin’ Ted” to “Low I.Q. Crazy Mika,” accompanied by original caricature artwork
• Trump vs. Trump: You’re going to want to sit for this one. Donald Trump has sometimes been known to contradict himself.
• Always the Best: the greatest boasts of the greatest boaster of all time, ever!

Comprising hundreds of Trump tweets, and featuring a foreword by Pulitzer Prize-winning historian Jon Meacham, and even a place for readers to add their own future Trump tweet highlights—because he is making new Twitter history literally every day—The Donald J. Trump Presidential Twitter Library is a unique portrait of an artist whose masterworks will be studied by historians, grammarians, and mental health professionals for years to come.

“The tweeting, I thought I’d do less of it, but I’m covered so dishonestly by the press—so dishonestly—that I can put out Twitter—and it’s not 140, it’s now 140, 280—I can—you know, I go bing, bing, bing and I just keep it going and they put it on and as soon as I tweet it out—this morning on television, Fox—(mocks reporter) ‘Donald Trump, we have breaking news.’ I put out a thing.”—Donald J. Trump, 15 January 2017

“The government is treating the President's statements to which plaintiffs point—whether by tweet, speech or interview—as official statements of the President of the United States.”—The U.S. Department of Justice, 13 November 2017

“My use of social media is not Presidential—it’s MODERN DAY PRESIDENTIAL. Make America Great Again!”—@realDonaldTrump, 1 July 2017