After the Flood (MP3 CD) 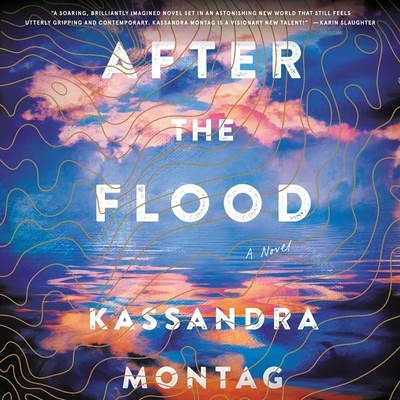 “A gripping story of one mother’s harrowing journey to survive a flooded earth and save her daughters from the dangers that surround them. Life after the great flood is treacherous, and lethal groups of raiders steal food, medicine, and children, killing those who would stand in their way. With flawed, relatable characters, After the Flood is a real thought-provoker. It demands you ask yourself: What would I do to survive? This passionate tale of survival and determination is not one to miss.”
— Kelli O'Malley, Boswell Book Company, Milwaukee, WI

An unforgettable, inventive, and riveting epic saga with the literary force and evocative imagination of Station Eleven, Zone One, and The Road, that signals the arrival of an extraordinary new talent.

A little more than a century from now, the world has been utterly transformed. After years of slowly overtaking the continent, starting with the great coastal cities, rising floodwaters have left America an archipelago of mountaintop colonies surrounded by a deep expanse of open water. Civilization as it once was is gone. Bands of pirates roam the waters, in search of goods and women to breed. Some join together to create a new kind of society, while others sail alone, barely surviving.

Stubbornly independent Myra and her precocious and feisty eight-year-old daughter, Pearl, fish from their small boat, the Bird, visiting small hamlets and towns on dry land only to trade for supplies and information. Just before Pearl's birth, when the monstrous deluge overtook their home in Nebraska, Maya's oldest daughter, Row, was stolen by her father.

For eight years Myra has searched for the girl that she knows, in her bones and her heart, still lives. In a violent confrontation with a stranger, Myra discovers that Row was last seen in a far-off encampment of raiders on the coast of what used to be Greenland. Throwing aside her usual caution, she and Pearl embark on a perilous voyage into the icy northern seas to rescue the girl, now thirteen.

On the journey, Myra and Pearl join forces with a larger ship, a band of Americans like them. In a desperate act of deceit and manipulation, Myra convinces the crew to sail north. Though she hides her true motivations, Myra finds herself bonding with her fellow seekers, men, women, and children who hope to build a safe haven together in this dangerous new world.

But secrets, lust, and betrayals threaten to capsize their dream, and after their fortunes take a shocking--and bloody--turn, Myra can no longer ignore the question of whether saving Row is worth endangering Pearl and her fellow travelers.

A compulsively listenable novel of dark despair and soaring hope, After the Flood is a magnificent, action-packed, and sometimes frightening odyssey laced with wonder--an affecting and wholly original saga both redemptive and astonishing.