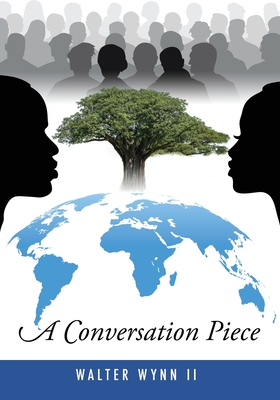 "A Conversation Piece" takes an in depth look, into African history in America. Chapter 1 attempts to thread the pragmatic life and religious faith of the African struggle in America into the needle of Christian Theology and European hypocrisy - both interwoven and expressed in their relationship to their religion.

"Centuries of actions, reactions and inactions were taken by people of faith - some who have done absolutely nothing to right the wrongs done by unscrupulous religious and secular leaders who tailor the Word of God to fit the audience most suitable to serve their twisted ambition."

The African American experience - although not acknowledged - has injected the truest meaning of freedom into the vein of America's national independence. Slave revolts reflected the willingness of people like (Jemmy the Angolan, Gabriel Prosser, and Nat Turner) to fight and die for freedom - if necessary. Deadly force was used against any African who stood bold enough to express his/her right to be free.

Such archaic and brute methods of intimidation are shameful. Remnants of its tragic effects still ripple throughout American culture today. The right to be free was expressed in revolts which were made illegal by those who attempted to preserve slavery.

"A Conversation Piece" uses data collected from paleontologists to support the genesis of humanity in Africa and to emphasize the exodus of humanity out-of-Africa. It uses these findings to approximate the age and earliest location of humanity prior to modern man (H. sapiens). Through Mitochondrial DNA taken from the human cell, geneticists have been able to approximate the location of the earliest woman to give birth to H. sapiens Thanks to Rebecca Cann, Mark Stoneking and Alan Wilson we now know that every human being on this planet today owe their ancestral heritage to an east African woman who lived 180,000 years ago from the vicinity of Tanzania, Africa The ancestral home of modern humans

I'll leave it to you, the reader, to ponder why the continent of Africa has yet to be acknowledged as the Garden of Eden.

In "A Conversation Piece" the oldest race of people on earth is revealed as the first race of people on earth. All other races that came after the first race of people are genetic variants who could not have survived hitherto without the physical presence of the original race. The author introduces the theory of pigment degeneration to explain skin color; illuminating skin differentiation as consequential to location rather than to emphasize ones personal prejudices by promoting one skin color over another. "A Conversation Piece" examines how the environment can lighten dark skin.

Diaspora Africans were cut off from community and family after being stolen away by European kidnappers. The loss of culture and identity followed Africans across the Atlantic Ocean to the Americas, where her descendants would be forced to endure long days of harassment and torturous days of terror for decades to come. Africans in America have had to "piecemeal an image" of themselves with stories wherever they could be found in order to etch out a positive narrative about their African heritage. "A Conversation Piece" provides for such a narrative.