Sijo Shijo Goshijo: The Beloved Classics of Korean Poetry on Everything Political from the Mid-Joseon Era (1441 1689) (Paperback) 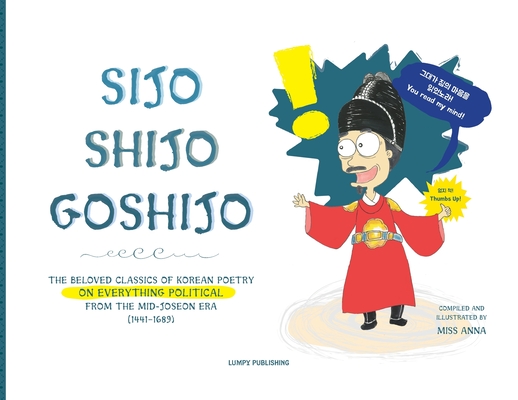 On the people's behalf.

Love Korean drama? You know, the ones where the actors and actresses wear the traditional clothing called the "hanbok". You do? What do you know Then you will love this The Korean poetry called the sijo, "shijo" to be correct, is the Korean drama in the making. Each piece of poetry captures the historical happenings and the unfolding drama of that given moment of time. Piece it together with the other historical backdrops and you will have a solid storyline based on true facts. Of course, there will be no melodramatic scenes or the picturesque portrayal of the Joseon times. Believe it or not, Joseon had its own share of the gory and the grim. To only beautify and glorify her is to forever silence those who had shed real tears of pain and anguish. And sijo poetries, which are hundreds of years old, are the untainted proofs of the agony the people did face. This is not to say that all sijos are dark and gloomy. Poets also expressed the happy and the serene, the joyful and the glad. Sijos are truly a drama in the making. It captures the real story behind the Joseon times, albeit in three-line snippets.

Miss Anna wrote this book with a singular audience in mind--people all over the world who are aspiring to learn Korean, children included. Hence, she has poured in all her creative energy to make classical sijo, also called goshijo, more accessible to language learners. You will find in this book:

1. Vivid illustrations with captions in Korean and English.

2. A simple pronunciation guide for each word for the everyday English-speaking people (not the McCune-Reischauer transliteration nor the commonly employed Romanization of Korean which are geared more for language experts and the linguists of the land). Note that some sounds cannot be accurately transcribed and taught through a book. Therefore, to get the correct nuance of the Korean letters, please consult a native speaker of Korean.

3. The most accurate sense of words and meaning of the words (and groups of words) in English.

4. Definition of words and groups of words in modern Korean for native speakers of Korean as a way to refresh their understanding of the sijo.

5. The thematic undertone of each poem.

6. Miss Anna's version of the sijo in English. (In all cases, the inherent music and the overall rhythm of a language are forever lost in translation. Hence, she focused on providing the most accurate sense and meaning behind each sijo on behalf of the poets.)

7. A short story behind each poem and the poet. This narrative does much to provide a fuller and a richer understanding of the poem. As the reader gets acquainted with the historical backdrop behind each piece, he/she will perceive its underlying emotions as well.

This book highlights twenty sijos from the Mid-Joseon time period. Included in the collection is the famous poem written by General Yi Soon-Shin and the beloved poem written by Kim Sang-Hon. Turbulent times marked this window of time. Enemies from within (infighting and political divisions) and enemies from without (the Japanese and the Jurchens, the future Manchurians of the Qing Dynasty) besieged the nation and battered the spirits of the people. However, while shedding bitter tears, the people survived, Joseon lived on, and the poets dipped their brushes in ink to tell their story. So do turn the pages to harken back to the people who once were. Buy the book and discover those who had no choice but to trudge through their given hour of history.