The Puffin Plan: Restoring Seabirds to Egg Rock and Beyond (Hardcover) 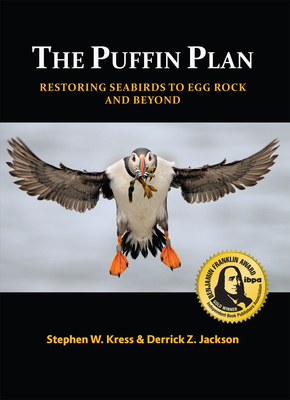 The Puffin Plan: Restoring Seabirds to Egg Rock and Beyond (Hardcover)


Available to order! Usually Ships to Store in 3-5 Days.
Fifty years ago, a young ornithologist named Steve Kress fell in love with puffin. After learning that hunting had eradicated their colonies on small, rocky islands off the coast of Maine, he resolved to bring them back. So began a decades-long quest that involved collecting chicks in Canada, flying them to Maine, raising them in coffee-can nests, transporting them to their new island home, watching over them as they grew, and then waiting—for years—to see if they would come back. This is the story of how the Puffin Project reclaimed a piece of our rich biological heritage, and how it inspired other groups around the world to help other species re-root in their native lands.
Derrick Z. Jackson is an award-winning former columnist for the Boston Globe. An accomplished photographer, his column was a finalist for the Pulitzer prize, and his UCS blog won a 2018 first prize from the National Society of Newspaper Columnists. Stephen W. Kress is a world-renowned ornithologist and Executive Director of the National Audubon Society's Seabird Restoration Program. He teaches at Cornell University, where he is a Laboratory Associate at the Cornell Laboratory of Ornithology.
“Project Puffin documents how one determined scientist with a real passion for the region, its ecology, its history, and its birdlife, can accomplish the reality of bringing back a species with a highly complex life history. It is exactly what lay readers and students need to read in order to begin to understand what conservation science actually is. And it is really fun (and I daresay inspiring) to read.” —John Kricher, author of The Balance of Nature and A Neotropical Companion

“A story of struggle and hope, and an inspiration to future wildlife stewards.” —Richard Louv, author of Last Child in the Woods and The Nature Principle

“An inspiring book on Stephen Kress's dream of re-introducing puffins to an island where man had eradicated them. A brilliant case study of how drive and enthusiasm can overcome problems.” —Mike P. Harris, co-author of The Puffin

“The world needs more people like Steve Kress, whose singular commitment and passion—a dedication to one bird at one island—has had a global impact. This book brings his story wonderfully and personally to life. I’m sure it will inspire and encourage a new generation of caretakers of the natural world.”—David Sibley, author of The Sibley Guides

“Engaging. . . Here is one of the great success stories of conservation. The verdict: Of interest to birders, natural history buffs, New Englanders, conservationists, and environmentalists.” —Henry T. Armistead, Library Journal

“Restoring puffins to Maine has been a glorious, four-decades obsession for Steve Kress—one underpinned by plenty of stubbornness and grit, as this frank retelling of Project Puffin's remarkable history makes clear. And thank goodness for that tenacity, because the techniques he pioneered on Eastern Egg Rock are today helping endangered seabirds around the world. This is the compelling story of the messy, uncertain, ultimately uplifting work of real conservation.” —Scott Weidensaul, author of Living on the Wind

“Readers who love the nitty-gritty of conservation will get a good flavor of it here.” —Bob Holmes, New Scientist

“Kress’s achievement is impressive both as a conservation victory and as an example of personal devotion and patience. . .[His] charm and wit bring the project to life.” —Thomas Urquhart, Portland Press-Herald

"Ornithologist Kress and his team restore puffins to Maine’s Eastern Egg Rock. When Kress became a birdlife instructor at Maine’s Hog Island Audubon Camp in 1969, the seabird biologist discovered that puffins once nested on nearby Eastern Egg Rock. Overhunting of their feathers for hats in the 1800s led to their disappearance. Realizing that humans had a responsibility to save these colorfully beaked birds, Kress developed a plan. Kress and journalist co-author Jackson chronicle what came to be known as Project Puffin. Starting with six puffin chicks from Newfoundland, Canada, in 1973, Kress and his team spent years figuring out ways to make Eastern Egg Rock a viable nesting location. Rather than bog readers down in minutiae, the conversational narrative enhanced by archival photos blends the right amount of logistical details with accounts of harrowing setbacks, constant trial and error, and eventual success. And rather than end there, the authors include a look at climate change and its negative impact on the puffins’ still-fragile ecosystem. They offer readers hope, however, with examples of successful seabird restoration projects around the world, from the rescue of the Short-tailed Albatross on Japan’s Torishima Island to the African Penguin Relocation Project in South Africa. While calling on young people to help, the authors also don’t skirt such controversial topics as gull control (i.e., killing gulls to save puffins). Sure to hatch activism in budding environmentalists." —Laura Simeon, Kirkus Reviews

"The Puffin Plane is especially and unreservedly recommended for middle school, high school, and community library Pets/Wildlife collections and the personal reading lists for anyone who has admired the Puffin and has come to appreciate the impact that climate change and habitat loss has had on this endangered species." —Midwest Book Review