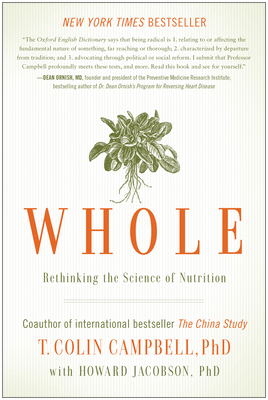 New York Times Bestseller What happens when you eat an apple? The answer is vastly more complex than you imagine. Every apple contains thousands of antioxidants whose names, beyond a few like vitamin C, are unfamiliar to us, and each of these powerful chemicals has the potential to play an important role in supporting our health. They impact thousands upon thousands of metabolic reactions inside the human body. But calculating the specific influence of each of these chemicals isn't nearly sufficient to explain the effect of the apple as a whole. Because almost every chemical can affect every other chemical, there is an almost infinite number of possible biological consequences. And that's just from an apple. Nutritional science, long stuck in a reductionist mindset, is at the cusp of a revolution. The traditional "gold standard" of nutrition research has been to study one chemical at a time in an attempt to determine its particular impact on the human body. These sorts of studies are helpful to food companies trying to prove there is a chemical in milk or pre-packaged dinners that is "good" for us, but they provide little insight into the complexity of what actually happens in our bodies or how those chemicals contribute to our health. In The China Study, T. Colin Campbell (alongside his son, Thomas M. Campbell) revolutionized the way we think about our food with the evidence that a whole food, plant-based diet is the healthiest way to eat. Now, in Whole, he explains the science behind that evidence, the ways our current scientific paradigm ignores the fascinating complexity of the human body, and why, if we have such overwhelming evidence that everything we think we know about nutrition is wrong, our eating habits haven't changed. Whole is an eye-opening, paradigm-changing journey through cutting-edge thinking on nutrition, a scientific tour de force with powerful implications for our health and for our world.

For more than 40 years, T. Colin Campbell, PhD, has been at the forefront of nutrition research. His legacy, the China Study, is the most comprehensive study of health and nutrition ever conducted. Dr. Campbell is the author of the bestselling book, The China Study, and the Jacob Gould Schurman Professor Emeritus of Nutritional Biochemistry at Cornell University. He has received more than 70 grant-years of peer-reviewed research funding and authored more than 300 research papers. The China Study was the culmination of a 20-year partnership of Cornell University, Oxford University, and the Chinese Academy of Preventive Medicine. Howard Jacobson, PhD, is an online marketing consultant, health educator, and ecological gardener from Durham, N.C. He earned a Masters of Public Health and Doctor of Health Studies degrees from Temple University, and a BA in History from Princeton. Howard cofounded VitruvianWay.com, an online marketing agency, and is a coauthor of Google AdWords For Dummies. When Howard is not chasing groundhogs away from blueberry bushes or wrestling with Google, he relaxes by playing Ultimate Frisbee and campfire songs from the 1960s. His current life goal is to turn the world into a giant food forest.