Much ADO about Nothing: The 30-Minute Shakespeare (Paperback) 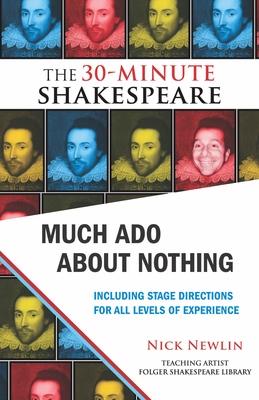 Much ADO about Nothing: The 30-Minute Shakespeare (Paperback)

Planning a school or amateur Shakespeare production? The best way to experience the plays is to perform them, but getting started can be a challenge: The complete plays are too long and complex, while scene selections or simplified language are too limited.

The 30-Minute Shakespeare is a new series of abridgements that tell the "story" of each play from start to finish while keeping the beauty of Shakespeare's language intact. Specific stage directions and character suggestions give even inexperienced actors the tools to perform Shakespeare with confidence, understanding, and fun

This cutting of Shakespeare's utterly charming and popular comedy MUCH ADO ABOUT NOTHING features five key scenes, including Beatrice and Benedick's classic initial word-battle, and the uproarious hide-and-seek deception of the two lovers. The next scenes are the brutal rejection of Hero at the altar by a deceived Claudio and the timeless manhandling of the English language by the bumbling constable Dogberry. In the fifth and final scene, Shakespeare resolves the play's conflicts and confusions, and love reigns again. This cutting really tells the story, and includes some sidesplitting stage business, particularly the back-and-forth physical and verbal parrying between Benedick and Beatrice.

The edition also includes an essay by editor Nick Newlin on how to produce a Shakespeare play with novice actors, and notes about the original production of this abridgement at the Folger Shakespeare Library's annual Student Shakespeare Festival.

Nick Newlin has performed a juggling and variety act for international audiences for 23 years. Since 1996, he has conducted an annual Play Directing residency affiliated with the Folger Shakespeare Library in Washington, DC. Nick has a BA from Harvard University with Honors 1982 and an MA in Theater from The University of Maryland with an emphasis on Play Directing.