Surviving the Angel of Death: The True Story of a Mengele Twin in Auschwitz (Hardcover) 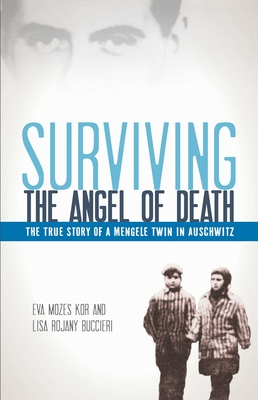 Surviving the Angel of Death: The True Story of a Mengele Twin in Auschwitz (Hardcover)

Out of Print, and unable to order.
Eva Mozes Kor was 10 years old when she arrived in Auschwitz. While her parents and two older sisters were taken to the gas chambers, she and her twin, Miriam, were herded into the care of the man known as the Angel of Death, Dr. Josef Mengele and subjected to sadistic medical experiments and forced to fight daily for their own survival. Through this book, readers will learn of a child's endurance and survival in the face of truly extraordinary evil. The book also includes an epilogue on Eva's recovery from this experience and her remarkable decision to publicly forgive the Nazis. Through her museum and her lectures, she has dedicated her life to giving testimony on the Holocaust, providing a message of hope for people who have suffered, and working toward goals of forgiveness, peace, and the elimination of hatred and prejudice in the world.
Eva Mozes Kor is a resident of Terre Haute, IN. She is a recognized speaker, both nationally and internationally, on topics related to the Holocaust and social justice. Eva created the CANDLES organization in 1985 to locate other Mengele twins and found 122 twins throughout the world. She then opened the CANDLES Holocaust Museum in 1995 to educate the public about the historic event she survived. A community leader, champion of human rights, and tireless educator, Eva has been covered in numerous media outlets and is the subject of a documentary, Eva A-7063.

Lisa Rojany Buccieri has written over 100 children’s books, including several award-winning and bestselling titles. She is also a publishing executive and editor with over 20 years of experience in the industry. Lisa lives with her family in Los Angeles.