The Sword and the Broom: The Exceptional Career and Accomplishments of John Mercer Langston (Paperback) 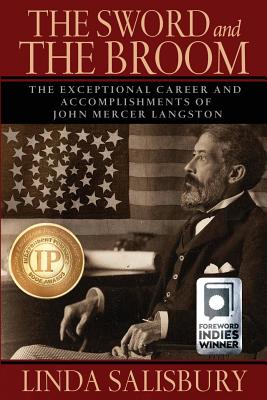 The Sword and the Broom: The Exceptional Career and Accomplishments of John Mercer Langston (Paperback)

Linda Salisbury's retelling of John Mercer Langston's life story is closely based on his 534-page autobiography, From the Virginia Plantation to the National Capital (published 1894). Langston's career in education, politics, and as a champion of Constitutional rights for all, is stunning, yet largely unknown today.

Born in Louisa, Virginia, in 1829, he and his siblings were the children of a wealthy white plantation owner and his emancipated slave. Langston was orphaned at age four, was moved to the free state of Ohio, and learned to be self-reliant.

He received two degrees from Oberlin College, was an abolitionist and powerful orator, rivaling Frederick Douglass. Undeterred by discrimination and racism, he was distinguished for his many firsts as a black American: first attorney in Ohio, first elected official, and first attorney accepted to practice before the Supreme Court. His accomplishments include founding Howard University's law department, and serving as the first president of what is now Virginia State University. His leadership also led to presidential appointments and ultimately a run for Congress. The election of 1888 was bitter, fraudulent, and full of racism; Langston appeared to lose. But when he contested the results, he was proven the winner and was finally seated near the end of his term as the first black Congressman from Virginia.

Langston's commitment to the cause of freedom, suffrage, and education deserve praise and recognition in American history.

The Sword and the Broom relies on language, stories, and descriptions from Langston's autobiography, and is enhanced by the inclusion of additional information and photographs.