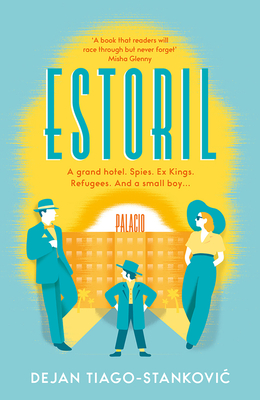 By Dejan Tiago-Stankovic, Christina Pribichevich-Zoric (Translated by)
$15.95
On Our Shelves Now

Set in a luxurious grand hotel just outside Lisbon, at the height of World War II, Estoril is a delightful and poignant novel about exile, divided loyalties, fear and survival. The hotel's guests include spies, fallen kings, refugees from the Balkans, Nazis, American diplomats and stateless Jews. The Portuguese secret police broodingly observe the visitors, terrified that their country's neutrality will be compromised. The novel seamlessly fuses the stories of its invented characters with appearances by historical figures like the ex-King Carol of Romania, the great Polish pianist Jan Paderewski, the British agent Ian Fleming, the Russian chess grandmaster Alexander Alekhine and the French writer and flyer Antoine de St Exupery, who forms a poignant friendship with a young Jewish boy living alone in the hotel.

Born in the former Yugoslavia in 1965, Dejan Tiago-Stankovic is an author and translator.

"As soon as I started reading, I knew I had chanced upon something very special. I was completely hooked by a book which is a comedy, a spy story, and a riveting piece of historical investigation that seamlessly integrates these genres. . . . A book that readers will race through but never forget." —Misha Glenny, author, McMafia

"The stories, most of them true, from Popov's rigorous debriefings by his German intelligence handler to Alekhine's terrible death, are extraordinary. . . . A diverting romp." —Sunday Times

"Dejan Tiago-Stankovic’s delightful, sprawling novel, Estoril, gives us a slice of history played out on Portugal’s “neutral” soil. . . . Crisply translated by Christina Pribichevich-Zoric, this is a fascinating portrait of a time when Europeans on opposing sides could sit next to one another in the casino, bar or restaurant, despite the conflicts raging outside." —Euro Lit Network