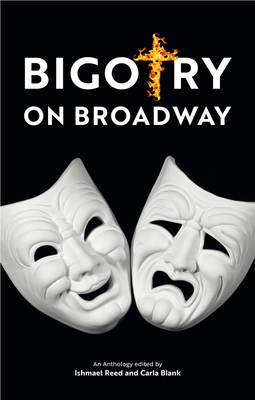 
On Our Shelves Now
In this hard-hitting anthology, Ishmael Reed and Carla Blank have invited 12 informed and accomplished writers and cultural commentators, both women and men, who are rarely heard to comment on the long-standing bigotry on Broadway towards many different ethnic minorities. Contributors are Lonely Christopher, Tommy Curry, Jack Foley, Emil Guillermo, Claire J. Harris, Yuri Kageyama, Soraya McDonald, Nancy Mercado, Aimee Phan, Elizabeth Theobold Richards, Shawn Wong and David Yearsley, in addition to Ishmael Reed and Carla Blank.
Ishmael Reed is an award-winning poet, novelist, essayist, playwright, songwriter, public media commentator, lecturer, and publisher. His play on the Broadway musical Hamilton, The Haunting of Lin-Manuel Miranda, garnered three 2019 AUDELCO awards and was published by Archway Editions in October 2020. The Terrible Fours, the third novel in the Terribles trilogy, was published in June 2021. Founder of the Before Columbus Foundation, he is a MacArthur Fellow and holds the 2020 Berkeley Distinguished Emeritus Award. Carla Blank is a writer, director, dramaturge, and editor. She co-authored Storming the Old Boys’ Citadel: Two Pioneer Women Architects of Nineteenth Century North America, with Tania Martin. She is author and editor of the 20th century historical reference Rediscovering America: The Making of Multicultural America, 1900-2000. Her two-volume anthology of performing arts techniques and styles, Live on Stage!, was co-authored with Jody Roberts.
"Insightful essays and interviews examine how white power structures on Broadway have shaped musical theater’s representations of Black, Indigenous, and people of color, or led to their absence ... A book for all readers interested in the history of Broadway musicals, theater criticism, and the role of whiteness in Broadway’s misrepresentations."  —
Library Journal

On previous anthologies by Ishmael Reed and Carla Blank

On Powwow: Charting the Fault Lines of the American Experience—Short Fiction from Then to Now:

"Reed and Blank have selected molten and magical tales that dramatically explore the consequences of our attitudes toward race, ethnicity, gender, class, and sexuality…. this is a live-wire, from-sea-to-shining-sea collection in which we hear America singing." —Donna Seaman, Booklist

"captivating, multifarious look at the American experience through its short fiction." —Publishers Weekly


On Rediscovering America: the Making of Multicultural America, 1900-2000 written and edited by Carla Blank

"[Ishmael Reed] is the purest literary troublemaker we currently have… a book that is arresting… always-bracing and readable."—Jeff Simon, Buffalo News

"Since the mid-twentieth century, Ishmael Reed has been deep, abrasive, and didactic, an iconoclastic champion of what is “good” and a formidable critic of what is “bad” in domestic and transnational affairs.  Reed is a fighter, a battered but undefeated fighter." —Jerry Ward Jr.


"That’s what I loved about Baldwin, something that I am inspired by about Baldwin, Amiri Baraka, Ishmael Reed, Gwendolyn Brooks—they were all darlings of the liberal establishment, and they rejected that status, which meant they were pushed to the margins." —Cornell West

"One of our greatest writers." —Brian Flota, The Hairsplitter


"Just when you think that Reed is exaggerating, or being one-dimensional in his analysis of racial issues, he’ll open another page of American history and show you something new." —David Homel, Montreal Review of Books

"With Ishmael Reed, the most persistent myths and prejudice crumble under powerful unrelenting jabs and razor-sharp insight." —Le Devoir, Montreal