Great Soul of Siberia: Passion, Obsession, and One Man's Quest for the World's Most Elusive Tiger (Hardcover) 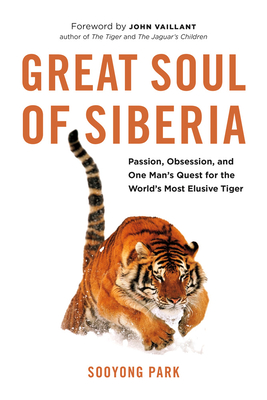 Great Soul of Siberia: Passion, Obsession, and One Man's Quest for the World's Most Elusive Tiger (Hardcover)


Available to order! Usually Ships to Store in 3-5 Days.
In The Great Soul of Siberia, renowned tiger researcher Sooyong Park tracks three generations of Siberian tigers living in remote southeastern Russia. Reminiscent of the way Timothy Treadwell (the so-called Grizzly Man) immersed himself in the lives of bears, Park sets up underground bunkers to observe the tigers, living thrillingly close to these beautiful but dangerous apex predators. At the same time, he draws from twenty years of experience and research to focus on the Siberian tigers' losing battle against poaching and diminishing habitat. Over the two years of his harrowing stakeout, Park's poignant and poetic observations of the tigers draw a fiercely compassionate portrait of these elusive, endangered creatures.
An award-winning documentary filmmaker, Sooyong Park has devoted over twenty years to studying and filming Siberian tigers. A film about him, Siberian Tiger Quest, aired on PBS and won Best Cinematography (a tie) at the 2013 International Wildlife Film Festival. He lives in Seoul, Korea. John Vaillant's work has appeared in The New Yorker, The Atlantic, and National Geographic among other magazines. His books, The Tiger and The Golden Spruce, were international bestsellers. His most recent book, The Jaguar's Children is his first novel. He lives in Vancouver.