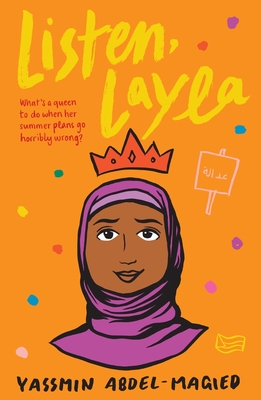 
Backordered
Exploring the diaspora experience, race, politics, and identity, Listen, Layla is an own voices novel for young readers, bursting with passion, humor, and truth.

What's a queen to do when her summer plans go horribly wrong? A powerful, funny, and timely novel for young readers.

Layla has ended the school year on a high and can’t wait to spend the holidays hanging out with her friends and designing a prize-winning Grand Designs Tourismo invention. But Layla’s plans are interrupted when her grandmother in Sudan falls ill and the family rushes to be with her. The last time Layla went to Sudan she was only a young child. Now she feels torn between her Sudanese and Australian identities. As political tensions in Sudan erupt, so too do tensions between Layla and her family. Layla is determined not to lose her place in the invention team, but will she go against her parents’ wishes? What would a Kandaka do?
Yassmin Abdel-Magied is a Sudanese-Australian writer, broadcaster, and award-winning social advocate. Yassmin trained as a mechanical engineer and worked on oil and gas rigs for years before becoming a writer and broadcaster. She published her memoir, Yassmin's Story, at age 24, and followed up with her first fiction book for younger readers, You Must Be Layla, in 2019. Yassmin’s critically acclaimed essays have been published in theGriffith Review, It’s Not About The Burqa,and The New Daughters of Africa. Yassmin founded her first organization, Youth Without Borders, at the age of 16, leading it for nine years. Since then, Yassmin has co-founded two other organizations and now shares her learnings through keynotes and workshops. Yassmin has spoken in over 20 countries on unconscious bias and inclusive leadership. Her TED Talk, What does my headscarf mean to you, has been viewed over two million times and was one of TED’s top 10 ideas of 2015.
"A rich multicultural narrative." — Kirkus Reviews