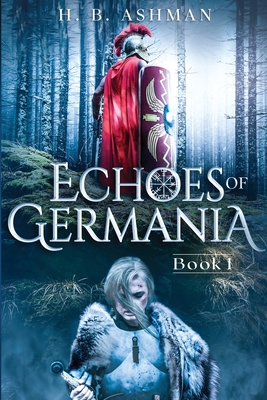 A bloody massacre. An ancient curse. One young German holds the course of history in her hands.

Engineering student Amalia Weber is only training in Olympic judo to please her overbearing father. Caught in a storm on her daily run, the screams of a drowning woman draw her to a lake deep within the mystic Teutoburg forest. But when she jumps in to attempt a rescue, she's pulled under herself... and somehow awakens alive two thousand years in the past.

Now, enslaved by Roman soldiers-including the legendary Germanic-prince-turned-Roman-officer Arminius-Amalia struggles to survive in a world where her life means nothing. And when her twenty-first-century knowledge is discovered, returning to her own time becomes the least of her worries.

Caught between the merciless forces of Rome and the wild Germanic tribes who dare to defy them, can a modern woman forge history as we know it?

Echoes of Germania is the first book in the riveting Tales of Ancient Worldsseries. A mix between Vikings, Rome, A Games of Thrones, and Outlander, H.B. Ashman's new novel is a stay-up-all-night nail-biter.