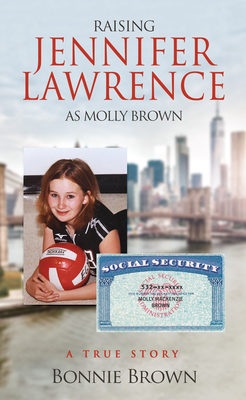 
This book may be unavailable. Please call us for price & availability: (316) 682-1181.
Bombshell book details the Hollywood star's early childhood years, estrangement from her mother, and bizarre disappearance.
Long before "Jennifer Lawrence" landed the lead role as Katniss Everdeen in The Hunger Games, she was a simple, humble young girl living in Grand Lake, Colorado. What happened to Jennifer and her family during her early teenage years is nothing short of heartbreaking. As the famous actress has continued to rack up accolades like her Oscar-winning performance in the Silver Linings Playbook, the world has been left to wonder what her childhood was like.
Until now.
What many don't know about 'J Law' might shock them in this much-anticipated new book from the mother of Jennifer Lawrence, Bonnie Brown. In Brown's illuminating new book, Raising Jennifer Lawrence as Molly Brown: A True Story, readers will learn that:
-Jennifer Shrader Lawrence's birthname is actually "Molly Mackenzie Brown". -The famous actress' birthdate was changed to conceal her identity. -Jennifer Lawrence mysteriously vanished in 2006 after her freshman year at Cordova High School in Tennessee. -Jennifer's mother, Bonnie Brown, recovered from a life of alcoholism and abuse to become a mentor and public speaker.
Who better to tell the story of Jennifer Lawrence's early childhood than her biological mother? Not only is Raising Jennifer Lawrence as Molly Brown a tragic story of loss and redemption, it is also a fact-based account of the events that molded a young Jennifer Lawrence into the talented, revered actress she has become today.
A Tale of Love, Life, and Acceptance Mothers and J Law fans alike will appreciate the challenges faced by Bonnie Brown as she describes the devastating loss of her husband to brain cancer followed by the alienation of her daughter, who has now become a household name among movie buffs. Think you know Jennifer Lawrence? You don't, until you read Raising Jennifer Lawrence as Molly Brown.
Discover the ingenious strategy Bonnie Brown used to locate her long, lost daughter through modern-day sleuthing, including a Social Security Number trace that proved the mother/daughter relationship. Read about what Jennifer Lawrence was like as a little girl as told by her mother herself, complete with photographs and documentation. Raising Jennifer Lawrence as Molly Brown is an absolute must-read.