Ancestry of Donald Trump: From Kings and Crusaders to President of the USA (Paperback) 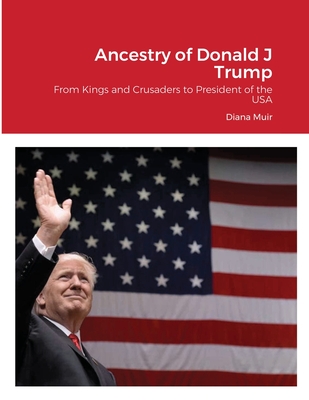 Ancestry of Donald Trump: From Kings and Crusaders to President of the USA (Paperback)


Available to order! Usually Ships to Store in 3-5 Days.
(This book is not returnable.)
The story of Donald J Trump is one of 'from rags to riches.' Some of his recent ancestors in Germany - the Kohl family - were cabbage farmers. They came from the village of Kallstadt which was famous for wine making. His own grandfather, Friederich, came to the US as a barber. When he moved to Queens, New York, he and his son began to buy property. Friederic died in the 1918 flu pandemic and his son Fred carried on his American Dream. Before long, Donald and his siblings inherited his father's vast real estate empire. However, when looking at his more distant ancestors generations back, his family is anything but ordinary. His father's side, from Kallstad, Germany extends back more than 50 generations to the early Kings, Counts and royal families of Van Kessel, Van Leuven, and Bourgogne, to Childeric and the Merovingian dynasty. His mother's family, the MacLeods, come from the Isle of Skye and the Isle of Mull on the western shores of Scotland. Small, bedrock islands, they have been the home of the MacLeods, MacDonalds, Mackenzies, and MacNeils for centuries, all of whom President Trump is related to. Going back as far 500 BC, the family marries into all the clans of the highlands and also extend back to the Merovingian dynasty and the Sea-Kings of Sweden and Norway. Along the way, many attended the Crusades, some as Knight Templars. It is easy to see that the President seems to have inherited all the passion and authority of his distant ancestors and continues to surprise us on a daily basis. Ask yourself - Are you related to Donald J Trump, the most famous man on earth? If you have German or Scottish ancestry, you most likely are.