How Dante Can Save Your Life: The Life-Changing Wisdom of History's Greatest Poem (Paperback) 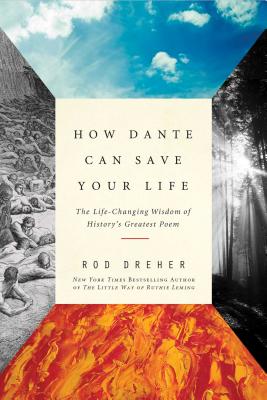 How Dante Can Save Your Life: The Life-Changing Wisdom of History's Greatest Poem (Paperback)


Available to order! Usually Ships to Store in 3-5 Days.
The opening lines of The Divine Comedy by Dante Alighieri launched Rod Dreher on a journey that rescued him from exile and saved his life. Dreher found that the medieval poem offered him a surprisingly practical way of solving modern problems.

Following the death of his little sister and the publication of his New York Times bestselling memoir The Little Way of Ruthie Leming, Dreher found himself living in the small community of Starhill, Louisiana where he grew up. But instead of the fellowship he hoped to find, he discovered that fault lines within his family had deepened. Dreher spiraled into depression and a stress-related autoimmune disease. Doctors told Dreher that if he didn’t find inner peace, he would destroy his health. Soon after, he came across The Divine Comedy in a bookstore and was enchanted by its first lines, which seemed to describe his own condition.

In the months that followed, Dante helped Dreher understand the mistakes and mistaken beliefs that had torn him down and showed him that he had the power to change his life. Dreher knows firsthand the solace and strength that can be found in Dante’s great work, and distills its wisdom for those who are lost in the dark wood of depression, struggling with failure (or success), wrestling with a crisis of faith, alienated from their families or communities, or otherwise enduring the sense of exile that is the human condition.

Inspiring, revelatory, and packed with penetrating spiritual, moral, and psychological insights, How Dante Can Save Your Life is a book for people, both religious and secular, who find themselves searching for meaning and healing. Dante told his patron that he wrote his poem to bring readers from misery to happiness. It worked for Rod Dreher. Dante saved Rod Dreher’s life—and in this book, Dreher shows you how Dante can save yours.
Rod Dreher is a senior editor at The American Conservative and the author of Crunchy Cons and The Little Way of Ruthie Leming. His work has appeared in numerous publications including the New York Post, the Dallas Morning News, National Review, First Things, and the Wall Street Journal, and broadcast on NPR’s All Things Considered and BBC Radio. He lives in St. Francisville, Louisiana, with his wife Julie and their three children.