Out of My Heart (Hardcover) 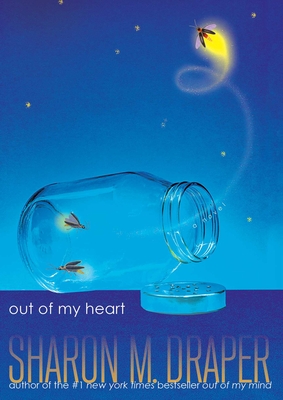 Out of My Heart (Hardcover)


Coming Soon - Available for Pre-Order Now
Melody faces her fears to follow her passion in this stunning sequel to the acclaimed, New York Times bestselling middle grade novel Out of My Mind.

Melody, the huge-hearted heroine of Out of My Mind, is a year older, and a year braver. And now with her Medi-talker, she feels nothing’s out of her reach, not even summer camp. There have to be camps for differently-abled kids like her, and she’s going to sleuth one out. A place where she can trek through a forest, fly on a zip line, and even ride on a horse! A place where maybe she really can finally make a real friend, make her own decisions, and even do things on her own—the dream!

By the light of flickering campfires and the power of thunderstorms, through the terror of unexpected creatures in cabins and the first sparkle of a crush, Melody’s about to discover how brave and strong she really is.
Sharon M. Draper is a three-time New York Times bestselling author and a recipient of the Margaret A. Edwards Award honoring her significant and lasting contribution to writing for teens. She has received the Coretta Scott King Award for both Copper Sun and Forged by Fire, and was awarded the Charlotte Huck Award for Stella by Starlight. Her novel Out of My Mind has won multiple awards and was a New York Times bestseller for over three years, and Blended has also been a New York Times bestseller. She taught high school English for twenty-five years and was named National Teacher of the Year. She now lives in Florida. Visit her at SharonDraper.com.
"A deeply satisfying and worthy continuation of a beloved story."
— Kirkus Reviews, STARRED

“Melody Brooks, a smart, determined 12-year-old diagnosed with cerebral palsy, returns in this sequel to 2010’s Out of My Mind. Longing for independence from her family and daily routines, she persuades her parents to let her attend Camp Green Glades, a summer camp for kids with disabilities in her home state of Ohio. With the help of her Jamaican American counselor Trinity and three cabinmates, Melody navigates new experiences—including zip-lining, horseback riding, and a first crush. Melody’s voice is as wryly funny as ever, and the supporting cast, which features kids and adults of various ethnicities and disabilities, treat her with respect and empathy… it’s impossible not to be charmed by the witty protagonist’s affirming, frequently ecstatic discovery of what it means to be part of a community that truly understands her.”