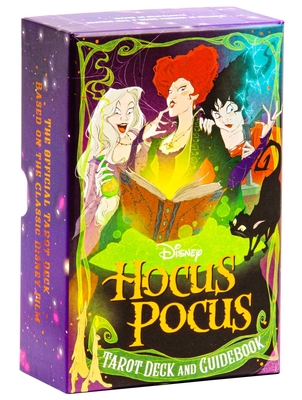 
On Our Shelves Now
Bring a touch of witchcraft into your tarot practice with this illustrated deck inspired by Hocus Pocus!

Beloved since its release in 1993, Hocus Pocus has put a spell on fans with its humor and heart. Now, tarot enthusiasts and Hocus Pocus fans alike can celebrate their love for the film with this official tarot deck.

• A MUST-HAVE FOR FANS: Featuring original illustrations of the Sanderson sisters and the wider world of Hocus Pocus, this deck matches characters from the film with tarot archetypes, making it a fresh interpretation of a traditional tarot deck.

• COMPLETE TAROT EXPERIENCE: This deluxe set of 78 cards consists of both major and minor arcana, perfect for anyone beginning their tarot practice, as well as for experienced practitioners.

• BEAUTIFULLY ILLUSTRATED: Each card features a full-color illustration of a character from Hocus Pocus, including the Sanderson Sisters, the Dennisons, Ernie, Billie Butcherson and more.

• DETAILED GUIDEBOOK: Includes a 128-page guidebook with explanations of each card’s meaning and simple spreads for easy readings.

• GREAT GIFT: Packaged in a sturdy and decorative gift box, Hocus Pocus: The Official Tarot Deck and Guidebook will enchant fans of the film and tarot practitioners alike.

See corrections and errata here.
Minerva Siegel is the author of Tarot for Self-Care: How to Use Tarot to Manifest Your Best Self. She writes about tarot, witchcraft, and living with disabilities for print magazines and online publications. When not writing, she practices divination and drinks rose lattes in the Victorian house she shares with her husband and their rescue dogs. Instagram: @SpookyFatBabe.

Tori Schafer is a writer and narrative designer for video games, and has worked on titles such as Elder Scrolls Online and Spellbreak. Her love of games is only matched by her love of tarot, which she has been practicing since she was a child. When she's not playing games or practicing tarot, she's spending time with her husband and beloved, bratty cat in their apartment.

DreaD. is an illustrator of the strange, unusual, and geeky. She spends all her time in her lair making fan art, casually threatening greeting cards, and fantasy pins with her goblins in the Pacific Northwest. She loves telling stories with her illustrations and hiding secrets in her pieces, and has tons of wacky things happening on her Etsy and Patreon(s). You can find out what she’s up to at: linktr.ee/drea.d.art.