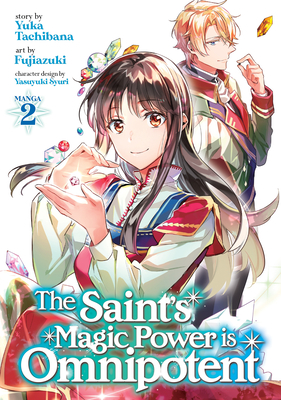 
Available to order! Usually Ships to Store in 3-5 Days.
AN ENCHANTED TOUCH Sei was summoned to a world in desperate need of a hero: a Holy Saint who could purify all evil. Unfortunately, she didn’t quite make the grade as a Saint, but her talent for making potions has saved a lot of lives, not least of all that of a dashing, handsome knight-captain. Much to Sei’s surprise, the supposedly frigid Winter Knight proves quite warm, and now the two have suddenly found themselves out on a date! With skills like hers, it won’t be long before she’s exploring all kinds of new magical frontiers.
Yuka Tachibana is a Japanese writer best known for The Saint's Magic Power is Omnipotent. Fujiazuki is a Japanese manga artist best known for The Saint's Magic Power is Omnipotent (Manga) and a Macross Delta prequel manga.
“It's always a pleasant discovery when the manga adaptation of a light novel you've enjoyed proves to be nearly as good.” --Rebecca Silverman, Anime News Network