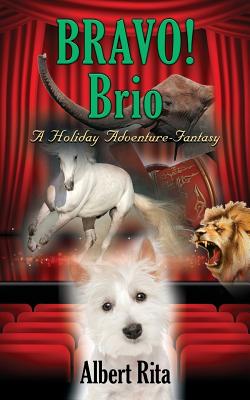 To impress his opera-loving masters, Brio, a too-proud and jealous mixed-breed dog, escapes his fenced yard one Thanksgiving morning to make his way to the Great City. There he plans to lead golden chariots, Arabian horses, elephants, lions, and Egyptian soldiers in a special Christmas Eve production of A da. By accomplishing this, Brio simultaneously aims to upstage Sophie, the family's award-winning and spoiled Siamese show cat, and to raise his own status with his family. The reader follows Brio weave his way through the twists and turns of his many adventures including facing the challenges of meeting-up with bounty hunters, a pack of street dogs, a gang of teenage ruffians, wild animal phantoms, and his pandemonium-causing stage entrance at the opera house. Then on Christmas Eve, barely having escaped untimely death, Brio is astonished to find himself chosen to lead a quite different but no less special Grand March.

BRAVO BRIO is a fast-paced book which may be read and enjoyed at multiple levels. It features lots of humorous dialogue, intriguing plot twists, a quirky mix of enticing anthropomorphic and human characters, and a late-chapter action crescendo with an exciting climax and surprise ending. It is sure to be enjoyed by juvenile and young adult readers alike and by dog lovers of all ages.