The Hermetic Physician: The Magical Teachings of Giuliano Kremmerz and the Fraternity of Myriam (Hardcover) 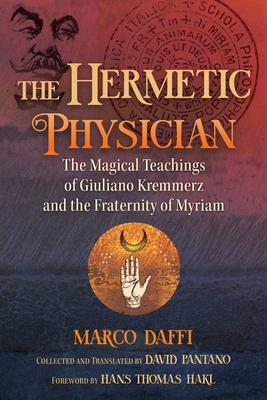 The Hermetic Physician: The Magical Teachings of Giuliano Kremmerz and the Fraternity of Myriam (Hardcover)


Coming Soon - Available for Pre-Order Now
• Explores Kremmerz’s life, his teachings, his work as a hermetic physician, and the metaphysical and hermetic principles that guided his activities

• Offers a detailed account of the distance healing practices, diagnostic methods, and rituals of the Fraternity of Myriam

• Includes texts written by Kremmerz on the inner workings and magical operations of the fraternity, intended for its practicing members

Giuliano Kremmerz (1861-1930), born Ciro Formisano, was one of the most influential Italian occultists, alchemists, and hermetic masters of the late 19th and early 20th centuries. In 1896, Kremmerz began writing about natural and divine magic, healing, and alchemy through the journal Il Mondo Secreto (The Secret World). At the same time, he founded a school known as the Schola Philosophica Hermetica Classica Italica as well as a magical group, the Therapeutic and Magical Fraternity of Myriam. Within the Fraternity of Myriam, he sought to use hermetic, magical, and Pythagorean principles to harness the power of the psyche and convey collective energies for therapeutic purposes and distance healing.

In this in-depth study of Kremmerz, Marco Daffi explores Kremmerz’s life, his work as a hermetic physician with the Fraternity of Myriam, and the metaphysical and hermetic principles that guided his activities. He provides an occult history of the Fraternity of Myriam and a detailed account of their practices, revealing the instructions and diagnostic methods of the hermetic medicine practitioner, or theurgist. He also includes texts written by Kremmerz on the inner workings and magical operations of the fraternity, intended for its practicing members.

Revealing Kremmerz’s rediscovery of occult healing, which goes back to ancient times when mystery schools were responsible for the healing arts, Daffi also shows how Kremmerz laid the foundations for passing the initiatory tradition on to the new millennium by modeling his school on the archetype of the Divine Feminine and the lunar form of cultivating the mysteries of Isis.
Marco Daffi, a pseudonym for Baron Ricciardo Ricciardelli (1900-1969), was an Italian esotericist and the author of several books in Italian on hermeticism and alchemy.

David Pantano is an independent researcher, translator, historian, and writer specializing in spirituality, metaphysics, philosophy, and the initiatic practices of West and East. Author of The Magic Door, he lives in Toronto.