The Twilight of Pluto: Astrology and the Rise and Fall of Planetary Influences (Paperback) 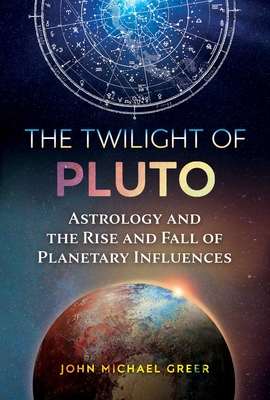 The Twilight of Pluto: Astrology and the Rise and Fall of Planetary Influences (Paperback)

• Explores Pluto’s arc of influence on individual and collective life in depth, from its discovery in 1930 to the end of its influence in 2036

• Offers examples from other demoted planets, such as Ceres, whose fifty-year reign as a planet corresponds very closely to the Romantic Era of history

Recent research in astrology has shown that the discovery of a new planet correlates with the emergence of a new set of influences in individual and collective life. As John Michael Greer reveals, the opposite is also true: the demotion of a planet correlates with the decline of a set of influences into the background. Although there are several instances of this over the last two centuries, Pluto, downgraded to minor planet status in 2006, is the most striking example.

Exploring the waxing and waning of planetary influences in astrology, Pluto in particular, Greer explains in detail how the demotion or proved nonexistence of a planet marks the beginning of a roughly 30-year period in which that planet’s influence fades out. He examines several examples of planet demotion, including Ceres, whose fifty-year reign as a planet corresponds closely to the Romantic Era of history. Ceres’s influence began to take shape some 30 years before its discovery in 1801 and gradually faded over the three decades following its demotion in the 1850s.

Examining Pluto’s astrological influence in depth, from the beginning of the search for “Planet X” in 1900 to the end of its influence in 2036, the author shows how during the Plutonian era the concept of cosmos--from the ancient Greek meaning “that which is beautifully ordered”--was in eclipse. Pluto’s influence led to the rejection of unity, beauty, and order, exemplified through the splitting of the atom by physicists, the splitting of the individual into conscious and subconscious halves by psychoanalysts, and the splitting of the world into warring camps by politicians.

Offering an essential guide not only to the astrology of the future but to the twilight of the Plutonian era, Greer shows how as Pluto’s influence fades out in the years ahead, a great many disruptive phenomena of the recent past will fade with it and the notion of cosmos--beautiful order--will regain its traditional role in our individual and collective worlds.
John Michael Greer is a highly respected writer, blogger, and independent scholar who has written more than 70 books, including The Long Descent, Circles of Power, and the award-winning New Encyclopedia of the Occult. An initiate in a variety of Hermetic, Masonic, and Druidic lineages, he served for twelve years as Grand Archdruid of the Ancient Order of Druids in America. He lives in Rhode Island.