That Left Turn at Albuquerque (Paperback) 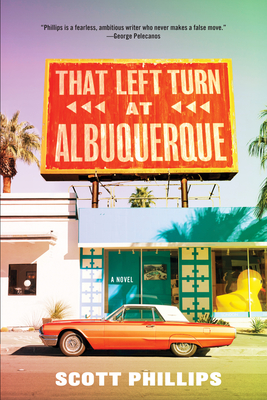 Scott Phillips’ talent lies in his comic timing and raw anti heroes. His LA is vivid. The dark and base characters are idiotic petty criminals and greedy lawyers and realtors using empty houses for extramarital affairs. The end was unexpected and completely satisfying. That Left Turn At Albuquerque is going to be fun to share with fans of noir fiction.

Longlisted for the 2020 CWA Gold Dagger

Praise for That Left Turn at Albuquerque

“Many writers bill themselves as noir, but if you want to experience what the word truly means, in its finest expression, then pick up That Left Turn at Albuquerque, a brutally funny, wickedly clever nightmare that heralds the triumphant return of Scott Phillips, the twenty-first century's greatest purveyor of crime fiction.”
—Blake Crouch, author of Recursion and the Wayward Pines trilogy

“In That Left Turn at Albuquerque, Phillips displays a master alchemist’s touch. No one blends the elements of happenstance, malevolence, unintended consequences, irony and humor into crime fiction magic like Phillips. No one!”
—Reed Farrel Coleman, New York Times bestselling author of What You Break

“A hilarious, twisty, dark, and profane romp deep into a modern noir world. The people in a Scott Phillips novel are so damn authentic, they remind me of folks I met while covering the crime beat. Phillips proves once again why he's one of the best crime writers out there.”
—Ace Atkins, New York Times bestselling author of The Shameless

"The cover of St. Louis writer Scott Phillips’ That Left Turn at Albuquerque shows a parked sports car gleaming in the sunshine. But behind that sunny cover looms a dark story — a noir tale, acted out by some shady souls."
—St. Louis Today

"The one persistent problem with reading a Scott Phillips novel is you can never figure out who you’re supposed to root for. You meet a series of engaging characters, all of them relatable -- and then you realize they’re all liars, cheats and maybe worse."
—The Oregonian

“Phillips is the real deal . . . Noir and black comedy have always been kissin’ cousins, but here they’re locked in a torrid embrace.”
—Booklist

“Funny, craftily malevolent . . . An ice-pick-sharp crime story that sustains its film-noir energy all the way to an outrageous whammy of an ending.”
—The New York Times

“[The author] has a way of writing a bon vivant of the Wild West with testosterone raging without it appearing macho or obnoxious or egocentric . . . It is a joy to read Phillips.”
—Huffington Post

“Taut and vicious . . . The essence of noir.”
—Los Angeles Times

“Phillips is dark, dangerous, and important . . . Crime fiction at its best.”
—Michael Connelly

“The unparalleled master of the noir anti-hero.”
—Megan Abbott

“One of the most original practitioners of noir working today.”
—Spinetingler Magazine