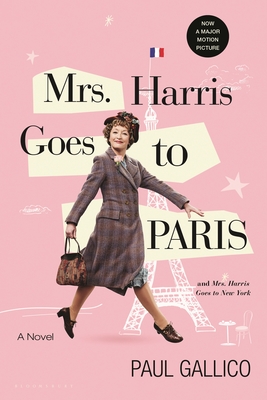 The delightful, uplifting story of Mrs. Harris, an ordinary woman whose life is transformed by one beautiful dress-now a motion picture starring Lesley Manville and Isabelle Huppert-and its sequel, set in New York.

Mrs. Harris is a salt-of-the-earth London charlady who cheerfully cleans the houses of the rich. One day, while tidying Lady Dant's wardrobe, she comes across the most beautiful thing she has ever seen in her life-a Dior dress. In all the years of her drab and humble existence, she's never seen anything as magical as the dress before her and she's never wanted anything so badly. Determined to make her dream come true, Mrs. Harris scrimps and saves until one day, after three long, uncomplaining years, she finally has enough money to go to Paris.

When she arrives at the House of Dior, Mrs. Harris has little idea of how her life is about to be turned upside down and how many other lives she will transform forever. Always kind, always cheery, and always winsome, the indomitable Mrs. Harris takes Paris by storm and learns one of life's greatest lessons along the way.

This treasure from the 1950s reintroduces the irrepressible Mrs. Harris, part charlady, part fairy godmother, whose adventures take her from her humble London roots to the heights of glamour.

Paul Gallico was born in New York City in 1897 and attended Columbia University. From 1922 to 1936 he worked for the New York Daily News. In 1936 he bought a house on top of a hill in South Devon, England, and settled down with a Great Dane and twenty-three assorted cats. In 1941 he made his name with The Snow Goose, a classic story of Dunkirk which became a worldwide bestseller. He wrote over forty books, four of which were the adventures of Mrs Harris: Mrs Harris Goes to Paris (1958), Mrs Harris Goes to New York (1959), Mrs Harris, M.P. (1965) and Mrs Harris Goes to Moscow (1974). He died in 1976.

“Mrs. Harris is one of the great creations of fiction-so real that you feel you know her, yet truly magical as well. I can never have enough of her.” —Justine Picardie

“It is almost impossible not to succumb to Gallico's spell.” —Times Literary Supplement

“Wherever she goes Mrs. Harris seems to sprinkle fairy dust over those she meets. YET she's very realistically drawn and the book is fraught with painful setbacks ... In the end Mrs. Harris' yearning for the dress is secondary. The friendships that are made because of her quest are what change her life forever. This book was a delight from start to finish” —Worthwhilebooks.blogspot