The Siege of Loyalty House: A Story of the English Civil War (Hardcover) 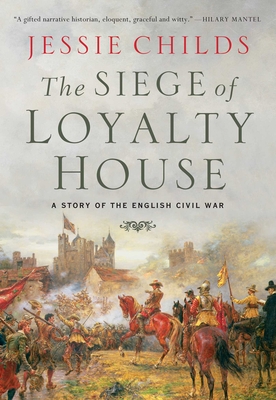 The Siege of Loyalty House: A Story of the English Civil War (Hardcover)


On Our Shelves Now
An immersive and electrifying account of a defining episode in the English Civil War that illuminates the human experience—and human cost—of this devastating war.

It was a time of puritans and populism, witch hunts and civil war.

Between 1643 and 1645, Basing House in Hampshire, England, was besieged three times. To the parliamentary Roundheads, the house symbolized everything that was wrong with England: it was the largest private residence in the country, a bastion of royalism and excess. Its owner, the Marquess of Winchester, reportedly had the motto Love loyalty etched into the windows. Winchester refused all terms of surrender. When he discovered his brother plotting to betray the house, he forced him to hang his accomplices. When the garrison divided along religious lines, Winchester expelled all the Protestants.

As royalist strongholds crumbled around the country, the Winchesters—and Basing House—stood firm. The famed architect Inigo Jones designed fortifications; gamekeepers became snipers; and the women hurled bricks at the besiegers. 'Loyalty House', as it was known, became the king's principal garrison. But the drum of the parliamentary army beat ever louder—and closer—and in October 1645, Oliver Cromwell rolled in the heavy guns.

The Siege of Loyalty House tells the story of these dramatic events, not only recounting the sallies and skirmishes, but the experiences of the men, women, and children caught in the crossfire. What was it like to be under siege, lying in bed with shells crashing through the window? What was it like to conduct a siege, sleeping on frosty fields, receiving news of sick children at home from desperate wives?

Ultimately, the story of Basing House is the story of England in the 1640s: a tale of brother against brother, of women on the frontline, of radicalism, iconoclasm, and fanaticism. It is a tale of destruction and derring-do, courage and cowardice, and a house on fire—the true end of an era.
Jessie Childs is the award-winning author of God's Traitors (winner of the PEN Hessell-Tiltman Prize for History) and Henry VIII's Last Victim (winner of the Elizabeth Longford Prize for Historical Biography). She has written for several journals, including the London Sunday Times, the Guardian, and the London Review of Books. Her television contributions include the BAFTA-nominated Elizabeth I's Secret Agents (PBS) and two BBC series on Charles I. Jessie lives in England.
Praise for The Siege of Loyalty House:

"A thrilling account of Basing House, a royalist stronghold during the English Civil War nicknamed 'Loyalty,' and the sieges it withstood until its fall to Oliver Cromwell in 1645."
— The New York Times Book Review

“In The Siege of Loyalty House, Jessie Childs tells the compelling story of a place that acquired a mystique far beyond its strategic significance. Underpinned by meticulous research, this finely crafted narrative unfolds in evocative and often poetic language. Childs possesses the knack of encapsulating action in a sentence or two of lively prose and telling imagery.”
— Stephen Brumwell, The Wall Street Journal

"Childs draws on unpublished manuscripts and the voices of dozens of men, women and children to tell this thrilling tale of war."
— Mail on Sunday BOOKS OF THE YEAR

“Describing how individuals get drawn, often haphazardly, into a bloody conflict such as the English Civil War is not an easy task. but Jessie Childs manages it superbly in The Siege of Loyalty House, which tingles with a discerning historical imagination.”

"This is war as it should be, passionate, brutal, bloody and chatoic, all described in luscious, evocative prose."

"A perfectly crafted triumph of narrative history... one of the most pulsating books on seventeenth-century England I have read."
— The Critic

"Riveting. Childs reconstructs their suffering – near-starvation, filthy water, a smallpox outbreak – with startling immediacy. Her focus is local and English, but the story is human and timeless."
— The Economist

"She is a gifted narrative historian, eloquent, graceful and witty; the stories she tells are the ones we all should know.”
— Hilary Mantel, New York Times bestselling author of The Mirror & the Light