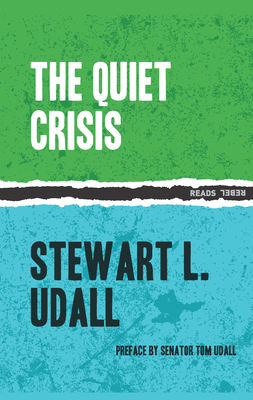 As Mr. Udall's vivid narrative makes clear, the race between education and erosion, between wisdom and waste, has not run its course. . . . The nation's battle to preserve the common estate is far from won.--President John F. Kennedy, from the introduction

Stewart Udall left an indelible mark on this nation and inspired countless Americans who will continue his fight for clean air, clean water, and to maintain our many natural treasures.--President Barack Obama

In his best-selling 1963 book, The Quiet Crisis, Stewart Udall warned of the dangers of pollution and threats to America's natural resources, calling for a nationwide land conscience to conserve the nation's wild places. Along with Rachel Carson's Silent Spring, The Quiet Crisis is credited with triggering the modern environmental movement in America.

Stewart L. Udall (1920-2010) was a pioneer of the environmental movement. He served as Secretary of the Interior from 1961 to 1969 under presidents John F. Kennedy and Lyndon Johnson. Udall warned of a conservation crisis in his best-selling book, The Quiet Crisis (1963).