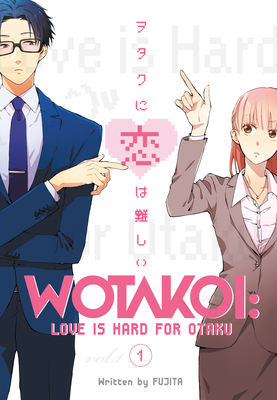 This is book number 1 in the Wotakoi: Love is Hard For Otaku series.

A geeky girl whose life revolves around yaoi manga and a quiet gamer boy are old friends, but when they start working in the same office, they decide to date. It's a relationship of convenience at first, but could it become something more? This manga comedy is now a hit streaming anime!

Narumi Momose has had it rough: Every boyfriend she's had dumped her once they found out she was an otaku, so she's gone to great lengths to hide it. When a chance meeting at her new job with childhood friend, fellow otaku, and now coworker Hirotaka Nifuji almost gets her secret outed at work, she comes up with a plan to make sure he never speaks up. But he comes up with a counter-proposal: Why doesn't she just date him instead?

In love, there are no save points.
Fujita rose to fame as an amateur artist, posting comics on the Japanese Pixiv sharing service. Wotakoi: Love Is Hard for Otaku is his professional manga debut in Japan.